It has been a while since the Dodgers had back to back homers in a game.    In fact, today was the first time the Dodgers have accomplished the feat in 2013.  In a game where Bud Black pulled a page out of what so many modern managers do these days, and lifted Andrew Cashner after his starter had held the Dodgers to one run, throwing 91 pitches through 8 innings, we'll take the charity.

Houston Street to the Padres looks to be what Brandon League was to the Dodgers in the closer's role.  Street is 0-4 with a 4.78 ERA.  He's had the propensity to give up the long ball this year and he did so three times to the Dodgers in this weekend series.  Black will probably be feeling the heat to remove him as the closer soon as he has a lot of more attractive options in the Padre bullpen.

Things didn't look too good after 7 innings for Los Angeles with the game tied at one the Dodger bullpen that has failed time and time again, was handed the ball.  The bullpen guys pulled through today.  Fine innings were pitched by Rodriguez, League and Jansen.  Even Moylan, who gave up a game tying homer, looked good, aside from the hanging breaking pitch that he threw to old nemesis Carlos Quenten. 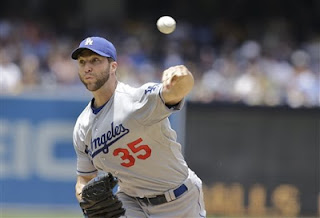 Chris Capuano, pitching on three days rest, had his second consecutive quality start and his emergence on this struggling staff will be huge if he can continue to perform as such.  Capuano went 5 innings, allowing 0 runs, 4 hits while striking out 5.  He threw 74 pitches and was lifted for a pinch hitter in the sixth inning, probably due to the short rest.  It was a pleasant surprise to see Capuano pitch like he did during the first half of last season.

The biggest mystery of the game and series that I have found is Yasiel Puig's position in the batter's box.  He's standing so far away from the plate, that the floundering swings he takes at low and away junk is nearly impossible for him to hit.  With a 1 for 4 day at the plate (from a squib single early in the game), Puig's average is still well over .400, but I'm assuming that his position in the box is something that McGwire is instructing him to do.  I can't figure out why, but what do I know about hitting on the major league level?  There must be a method to their madness.

***************************
Curious happenings in AT&T Park in San Francisco.  Former Dodger Nathan Eovaldi stymied the San Francisco Giants in a 7-2 Marlins win today.  Giant announcers were completely shocked that he was throwing 97 MPH fastballs on the black all day long as he went 6 innings, while striking out 7.  Good for Nathan, we could sure use him now, but it's nice to have a hot Hanley Ramirez in exchange for him.