Call me a product of the 60’s and 70’s.  Perhaps I'm just and crotchety old man that refuses to accept change. Maybe my fashion sense is out of whack,  (Actually, I think the latter statement is quite true because my wife says I couldn’t color coordinate what I wear if my life depended on it).  But I’ve got to tell you, the way ball players wear their uniforms today just kind of drives me nuts.  When they put on the old uniforms on nostalgic throwback days, and wear them in the 2010’s fashion, they look just plain crazy.

First off, the loose fitting, baggy style that is en vogue these days, just doesn’t work when players don the old uniforms for a day.  As ugly as some of those 70s and 80s uniforms were, they look even uglier when their are oversized and baggy.  Let me explain though pictures. 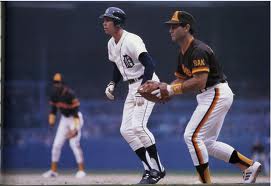 These Padres Throwbacks from the 80s were described as the "Taco Bell" uniforms by Steve Garvey.  The brown and yellow things were about as ugly a color combination as could be coordinated, but at least in Garvey's era, the players wore shirts that were actually the correct size to give them the look of slow-pitch softball players.   I never thought i'd say this, but a player like the Garv actually looked good in those duds (as shown in this 1984 World Series photo with Alan Trammel wearing the classic Tigers home uniform), when compared to modern players that put those things on in the 2000s "baggy style" sported by Brian Giles and Kevin Kouzmanoff in 2008.

Then there are the pants.  For some reason, about 15 years ago baseball pants styles started to cover the sanitary socks and stirrups.  As the years passed, the pant style got low and lower to the point that today, ofter we see players tucking the bottom of their pants legs underneath the bottom of their shoe and tucked un under a cleat or two.   Frankly I think the look is ridiculous.  Others may think it's a new chic look.  Take a look at this Phillies throwback look with Jimmy Rollins and then compare it to the look of Steve Carlton wearing the powder blue road uniforms from the late 70s. 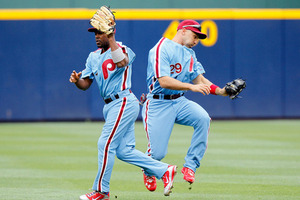 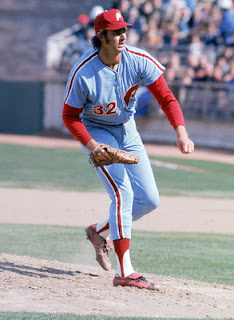 Here you have the full stirrup look.  Even with the fairly unattractive light blue uniform, the traditional look remained.

There was a time when baggy looked good, but it was a natural baggy style, not a manufactured look for style purposes that exist today.  The old baggy style - wool flannel uniforms certainly weren't made for comfort , but players from the era claim that they weren't overly uncomfortable as wool fabric breaths naturally unlike the modern poly fibers that are used.  It is said that the flannels soaked up sweat like a sponge and on a hot summer day could pick up substantial weight due to that factor.  Today's uniforms are light weight material and made for comfort and maximum  athletic advantage.


The modern baggy style has taken "oversize" to a new level as Prince Fielder has got to be wearing an XXXXXL size.  It can't be easy to make that physique look slimmer.  There are advantages to this style as inside pitches often find the flaps of such oversized jerseys or pants legs, resulting on free first base passes via the HBP. 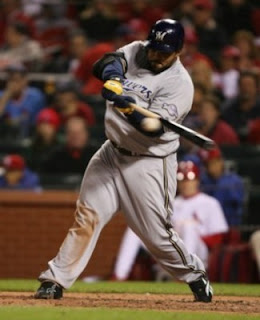 Oh yeah, then there are the hats.  I simply don't get this look.  Off center with the flat brim.  Add Juan Pierre and Justin Upton to the list of guys that like this look along with CC Sabathia. 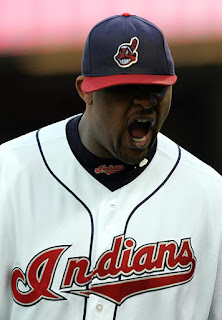 With the uncurved brim, turned sideways look, my son's Junior College baseball coach would make them run laps if he caught his players wearing their hats in this fashion, and still, some players tried to get away with doing it anyway.  We all remember George Sherrill wearing that uncurved brim with the Dodgers.  Known as the "Brim Reaper,"  the look didn't do anything for me, but at least he'd center the thing on his head. 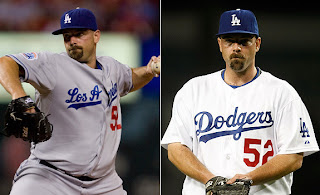 The Andy Pettite curved brim lowered to eye level was one of the most intimidating looks in the game.  He used that fashion statement to his advantage and looked cool in the process, concealing his brow and parts of the eyes.  Hitters won't admit it, but he must have used this look to his advantage on the way to a stellar pitching career with numerous post season wins. 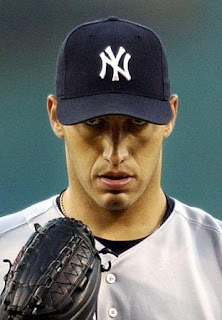 My question is "What next?"  Baseball fashion has been all over the map.  From Baggy flannels to rainbow polyester, high socks to no socks,  short pants to long pants.  Well, there has always  "Turn Ahead the Clock Days" that MLB tried at various ball parks in 1999.

Is this the look of the future? 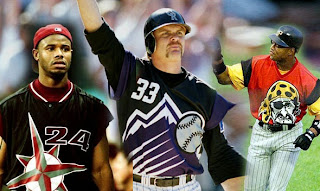 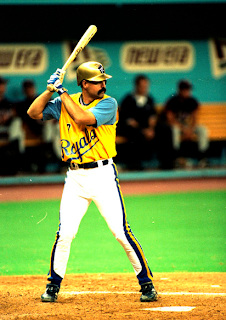