Piazza's Induction Should Be As a Dodger

As Baseball Writers Association Voters submit their ballots for 2013 Hall of Fame Inductions this month.  We are looking at a number of fantastic first time players on the ballot and a lot of uneasiness that involves players that played during the Steroid era.  There is a lot of anticipation regarding this years vote, and many of those voting have already identified the greatest hitting catcher of all time, Mike Piazza, as a probable first ballot Hall of Famer.  I couldn’t agree with their assessment more.

So it’s time for some controversy.  Time to tick off a lot of Mets fans.  I imagine that if he ever got around to reading this, Mike Piazza himself wouldn’t be happy about it either, but the fact is that Mike Piazza’s best years were as a Dodger.   For that reason I believe that Piazza should go into the Hall of Fame in a Dodger hat.

For some reason the team identification of the inducted player is important to fans.   I’m caught up in the controversy too.  Piazza was the face of the Dodgers from 1993 to 1997 and few Dodger players had such a dominant run while with the team. Nary a Met fan paid any attention to him at that time.  I know because I remember arguing with several of them back in a 1996 AOL message board that Piazza was heads and tails better than Todd Hundley.  It was insane.  There simply was no way to get through to the dozen or so that attacked my position.  I will give Met fans this though, they are certainly passionate and opinionated.

I have no problem with Met fans.  They might have the most emotional fans out there and I won’t argue that Dodger fans are more passionate because we aren’t.   I sympathize with them.  It would not be fun having to share a market with the Yankees and having to put up with that arrogant fan base.  They know their baseball and they genuinely care.

It’s a franchise that has had some magic moments and amazing players.  Seaver, Koosman, and Matlack were quite a tandem in the 70’s.  Nolan Ryan should have never got away from them.  The ’69 team was for the ages.  The ’73 “gotta believe” bunch caught lightning in a bottle and came within a whisker of winning it all.  The mid to late 80’s teams were better than what they accomplished and should have taken another title or two.

It’s easy to admit that their fans are more passionate than ours.  The proof is in the pudding by simply looking at Citi Field at the time the first pitch is thrown.  Many are more knowledgeable too if they allow their team loyalty to not cloud their reasoning.

So with that, I argue to all those Mets fans that they look at facts in an impartial and fair manner.  If they do so they’ll have to admit that Piazza’s career was better as a Dodger than as a Met.

Piazza was the hard luck loser in two batting title chases.  1995 when he batted .346 and was aced out by Hall of Famer Tony Gwynn’s .368.  Again in 1996 falling short to Gwynn’s .353 again and behind Coors enhanced Ellis Burks. Then in 1997, Piazza’s best season, Mike hit an amazing .362 (a Dodger record) only to find that Gwynn bested that mark at .372 and Rockie Larry Walker’s .366.  Piazza’s home park had to have cost him several points each of these years.

A comparison of the Dodgers vs. Mets numbers are eye opening.  Hit hit a full 35 points higher as a Dodger, with a near .400 on base percentage.  Even the sabermetric numbers favor Piazza’s Dodger years with Mike’s Offensive Wins Above Replacement stats leading the league in  ’97 and ranking second in ’95.  He never once ranked in the top five as a Met.

As a Met: An All Star 7 of 8 seasons. The MVP vote: 3rd place once, no higher than 7th in voting in any other year.  Silver Slugger 5 of 8 seasons.

There is little doubt that Piazza’s peak seasons at ages 25 through 28 are the reasons his numbers are better as a Dodger.  In ’95, Piazza finished 4th in the MVP vote behind Larkin, Bichette,and Greg Maddux, collecting 3 first place votes.  The following two years are the seasons that Piazza should have won the award but circumstances didn’t fall in his favor. In ’96 he lost out to unanimous winner Ken Caminiti who had superior numbers, but we later were to find out that he was a massive performance enhancing drug user, so much so that it eventually destroyed his career and life.  In ’97 Larry Walker took home the hardware, again having superior numbers that were enhanced by the light air and bandbox known as Coors Field.  As a Met, Piazza’s third place finish in 2001 was behind Kent and Bonds at San Francisco.  ’01 was easily Piazza’s best year as a Met.

A little recognized measure in the career of Mike Piazza had to do with his defensive abilities behind the plate.  Known mainly as a defensive liability, it should be noted in Piazza’s rookie year with the Dodgers, he did lead the league with 59 runners thrown out caught stealing, throwing out 35.3% of attempted base stealers.  His range factor was first in the league in both ’93 and ’95, something that deteriorated significantly during Piazza’s career with the Mets.  It should be noted in defense of those that favor Piazza’s Mets career that he led the league in fielding percentage in 2000, his third year in New York.

Piazza took pride in handling pitching staffs and calling games.  One of his finest achievements took place on the defensive end as he caught Hideo Nomo’s remarkable no-hitter on a raining Colorado night, September 17, 1996.  This was a game that many consider one of the greatest no-hitters ever thrown in the high altitude and pre-humidor Coors Field.  He also caught Ramon Martinez’ no-hitter on July 14, 1995.

As a Dodger, during the six seasons that Piazza handled the pitching staff, the Dodger team ERA was 1st in the league once, 2nd-twice and 3rd once.  All this during the amazing run of the Atlanta Braves staff of Maddux, Smoltz, Glavine and sometimes Avery.  With the Mets, Piazza’s handling of the staff was noteworthy too, but the team ERA never ranked higher than third in the league.

Those that argue in favor of Piazza’s Mets years will repeatedly mention the year 2000 when the Mets won the National League Pennant, only to be defeated in the World Series to the Yankees in 5 games.  It’s a good argument but it’s important to note that the Mets were by no means a dominant team during the Piazza years.  In fact, they never won a division championship while he was there and they qualified for the playoffs twice as the Wild Card (’99 and ’00).  It should be noted that as a Dodger, Piazza won a Division championship in 1995 and in the strike shortened ’94 season, his team was leading the west when the season stopped.  In '96  his Dodgers finished tied with San Diego for first (losing the division on head to head tiebreaker). There is not a marginal difference here.  Not enough to make a significant difference in my view.

Mike’s departure from the Dodgers was ugly, and so much so that Piazza carried a grudge against the organization that continues to this day.  That isn’t really fair when you consider that the unpopular Fox regime traded Piazza away in what was probably the most unpopular trade in team history,  (additionally, nobody remains with the Dodger club that was involved in that trade)  The fans hated the deal.  Piazza returned to L.A. as a visiting Met to a crowd that gave him a standing ovation when he stepped to the plate for the first time, and second and third time that day.

In 2001, Piazza's emotional homers in the "healing game" following the 9/11 attacks put him forever in NYC lore as a true hero, and the city completely embraced him as their own after that.  It was an emotional attachment that I believe ties the greatest hitting catcher of all time to the Mets.  But I contend that the emotional ties to the Dodgers should be at least equal, probably because the young man never would have been a ball player had Tommy Lasorda not stepped forward and insisted that the Dodgers take a flyer on him.

The 1,027th player taken in the 62nd round of the 1988 draft, who learned to catch in the minors and in the Dominican with Ralph Avila.  He was groomed through the Dodger organization.  He became a star as a Dodger.  He was loved by a fanbase hungry for a genuine home grown star.  Kids in the 90s idolized this player.  I'll never forget that long conversation I had with my son, who was 9 years old at the time, trying to explain that stupid trade that Chase Carey stepped in and made over Fred Claire's head.  Mike should have been signed to a lifetime deal.

Piazza was the player that the Dodgers marketed the team around in the mid 90s.  He was groomed to be a Dodger from day one by his father’s boyhood friend Tom Lasorda.  Piazza was a true Dodger and it’s a crime that he was dealt away when circumstances should have been completely different had a competent regime not stepped in and taken ownership of the team.

This is the year the Dodger management needs to step forward and really extend an olive branch to Piazza.  Have a Mike Piazza day at the ball park.  Give out a bobblehead in his likeness that I am convinced will be as popular as the Koufax and Scully ones this past year.   Do what needs to be done to get him back into the fold.  Donate to his charity.  Bring the Italian team to L.A. to train.  I don't know.  Whatever it takes, do it.  Have Magic Johnson do his magic to heal the wound.

So that’s my piece.  Piazza as a Dodger inducted in the Hall. If you want to really resolve this dispute, he goes in with a plaque depicting him like this though. 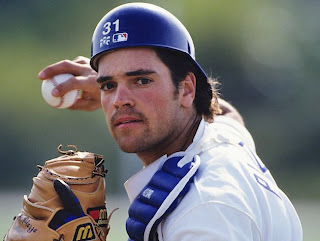 We all know that's a Dodger Chest protector and helmet.