Roberto's 5-Hit Day at Dodger Stadium, I Saw It

I was only 9 years old, and I certainly didn’t have advanced baseball knowledge, but I knew enough to realize that I was watching absolute greatness.  And though the seats were way high up and the game was a marathon 16 inning affair that lasted 4 hours and 21 minutes, and the whole family wanted to leave, my dad allowed me to stay to the end and watch Roberto Clemente beat the Dodgers 2-1.  It was August 22, 1970, the day after my birthday. 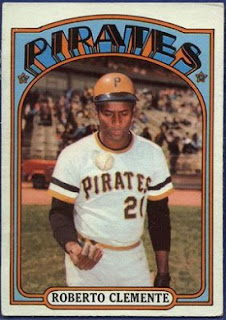 This was a game in which 4 eventual Hall of Famers played a role, (Sutton, Mazeroski, Stargell and Clemente).  Roberto drove in the Pirates first run in the top of the third.  He ended it in the top of the 16th with a single, stolen base, and run scored on a base hit.  He also made a circus catch robbing Manny Mota of a sure RBI double and I remember a specific play where a single was hit his way that the Dodger base runner didn’t dare attempt to advance to third.

In a 1-1 game in the 9th, Roberto led off the top of the frame lining out on a rocket to Dodger right fielder Bill Russell,  (yes, that Bill Russell).  It was absolutely tatooed, but was hit right at him.

Dodger closer Jim Brewer, relieved Don Sutton in the 10th inning and tossed 4 innings of shutout ball, striking out six.  Imagine that, the closer went 4 innings in the dog days of August.  Can you imagine a closer throwing four innings today? 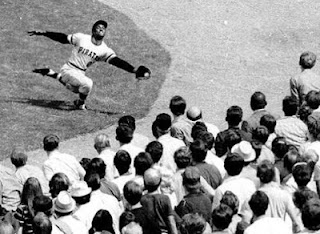 With all the talk the last few days of the 40th anniversary of Roberto Clemente’s death, I just had to look up the details of that specific game that still remains in my mind, 42 years later.  It left an indelible mark on me,  (I mentioned that same game in a post last year too, though I had completely forgot that I wrote it).  Clemente was absolutely phenomenal and though my 9 year old mind was disappointed that the Dodgers had lost, I remember thinking that Clemente was the best player that I'd ever seen.  Today, I'm pretty sure that continues to be the case.

He wasn't the greatest hitter.  I saw Hank Aaron's greatness, and I saw Barry Bonds superhuman steroid enhanced performances, but as an overall player, Clemente was it for me.  He had that jerky trot as he sped around the bases.  It almost looked like a limp, but it wasn't because he was as speedy as a gazelle.  He'd run down balls in the outfield that few could get to and then he'd whirl and throw without pause.  And those throws.  Oh, those throws.  They were accurate darts that were things of beauty. 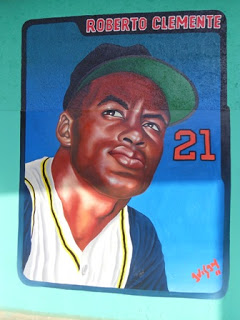 On January 1, 1973, I heard the news from Curt Gowdy, who I believe was calling the Rose Bowl game between USC and Ohio State.  It was shocking.  His picture was shown on the screen, "Roberto Clemente,1934-1972," it read.  He hadn't even made it to New Year's day.   My brother and I were left numb.  So tragic.  Such a loss.  In the period of two and a half months the baseball world had lost Jackie Robinson and then Roberto Clemente.

When the Strat-O-Matic cards arrived to us a few weeks later and we began our season, one of the teams I managed was the Pirates.  I didn't play Clemente.  I just couldn't do it.  It was as if I was really managing the team.  The death was too recent.  The pain still there.  It just didn't seem right to be playing him.

Now, all these years later, I'm still saddened when thinking what we lost.  Roberto would be 78 years old today had he lived.  It's tough to imagine Roberto at that age.  He was so strong, vibrant, young looking and handsome.  That athletic build and strength remains fresh in my mind.  It will forever.  That is the magic of Roberto Clemente.  A young stripling athlete that exuded greatness.  He'll always be remembered as that.  It should be noted that in 1972, Roberto wasn't close to healthy.  Suffering from a stomach virus, he reported to Spring training ten pounds lighter than the year before.  He suffered from tendonitis in his ankles and a rheumatic heel.  He played in only 102 games in '72.  It was probably the beginning of the end of his career though he entered the off-season poised to regain his strength and health.

And as a great humanitarian he died in a charitable relief effort.  Such a loss.  What a great man.