What to Do With So much pitching?

Kershaw, Greinke, Beckett, Billingsley, and Ryu.  Capuano, Harang, Lilly, Fife.
That’s nine men who could pitch on major league staffs.  We know that most likely not all will be healthy at the start of the season.  We also know that it’s probably pretty a good bet that more than five will be healthy.  Finally, I think it’s a pretty good bet that one or more will be pitching in another major league uniform when April 1st arrives.
I listed the pitchers in the order that I see them ranked on the staff.  Working backwards, let’s see where they could end up.
Stephen Fife
Stephen got a taste of what it’s like being a Dodger starter and that usually means zero run support.  In his major league debut against the Phillies, he outpitched Roy Halladay, leaving the game with a 2-1 lead after six only to watch the bullpen cough up the lead and take a loss.  There was more of that to come as he had quality starts against San Francisco, St. Louis and Cincinnati.  All this resulted in an 0-2 record over five starts with a 2.70 ERA.
Unless the injury bug attacks half of the starters signed, Fife is bound for another year at Albuquerque where he was a respectable 11-7, 4.66 in the altitude.  Fife will turn 26 in 2013, so there’s still time for him to be considered young enough to break with a Major League staff.  I liked this kid’s composure last year when he was thrown out there in the middle of the playoff hunt.  Who knows?  Maybe the Dodgers could have used him down the stretch.
Very few minor league pundits consider Fife to be a quality prospect and he seems to be looked over the top quality minor league pitchers in the Dodger organization such as Lee, Gould, Reed and maybe even Withrow.  His stuff isn’t electric and he is projected to be at best a number 5 reliever or long reliever on the major league level.  One thing to remember though is that sometimes the guys with the mediocre repertoire and lack of an out pitch, (pitchers like Doug Rau, Geoff Zahn and Kirk Reuter), turn out to be stalwarts in major league rotations for years.   A pitcher with the make up to be at the back end of a major league rotation.
Ted Lilly
Lilly started 2012 like gangbusters.  Throw out his last start, when he pitched injured and got shelled for 8 earned runs in three innings and his numbers were spectacular.  5-0, 1.79 ERA,  seven straight quality starts. But try as he might to return late in the season, Ted couldn’t do it.  Set back after set back arose.
Truth is, we have no idea if Lilly will ever be back.  He’ll be 37 years old this season.  He hasn’t pitched out of the bullpen since 2001 and it’s difficult to imagine him cracking this starting staff.
Shoulder injuries have done in so many pitchers.  We waited for three years for Jason Schmidt to come back from one and he never was the same.  Lilly was unable to pitch without pain in the minor league rehab starts.  Then he suffered a back injury.  Eventually it was decided to perform arthroscopic surgery on Lilly’s shoulder in September with hopes he’d be ready to come back in spring training.
If Ted does come back, I see him either in the bullpen or traded to a club in need of a starter just before the end of the exhibition season in March.
Aaron Harang
Aaron had his moments last year.  Most notable, his 9 consecutive strikeouts against the Padres, in a game that he couldn’t even pitch long enough to earn a victory.  Overall though, it’s unfair to claim Harang was mediocre.  10-10, with a 3.61 ERA in 31 starts was not at all shabby for a number 4 or 5 starter.
My wish is that they consider Aaron in a one inning role out of the bullpen.  Harang is the type of power pitcher that I can see being very effective if he is able to go out for one inning and air it out.  His velocity can still be in the mid 90s if he throws with everything.  That 6’7”, 260 pound frame can be an intimidating presence that I believe can shut down a teams in a key inning.
Many would see that as a closer, but I have always been of the belief that the save is overrated and that often, the key situation for a reliever might be the 7th or 8th inning when a tense situation appears for the bullpen.  I’d love to see a guy like Harang come in with that fastball and mix his change, slider and curve when necessary.  Just an idea.  With that said, he’ll probably be traded.  We’ll miss his super soaker squirt gun.
Chris Capuano
Capuano is probably very disappointed with the way things have turned out.  I believe he’s got a good shot to land the number 5 starting spot though.  That’s because Ryu and Billingsley are big question marks.
It would be very wise to keep Cap on the roster, even if he doesn’t crack the starting staff.  As a long reliever he could be effective and eventually he’d be a solid man to step in to the rotation when injury rears it’s ugly head with one of the top five.
It’ll be interesting to see how Capuano approaches Spring Training and how management judges his Spring Training effectiveness in the late exhibition schedule.  Will he be pressing to make the starting staff, pitching for his life or will he be working and experimenting on his stuff in spring games?  This doesn’t just apply to Chris, but to others as well. 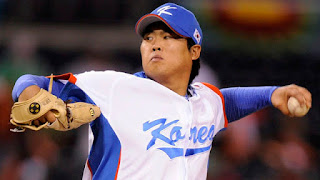 Hyun-Jin Ryu
I have no idea what to expect.  I think it’s safe to say that he’ll be given a legitimate shot to make the staff.  Too much money has been spent ($36 million) to send him to the minors or the bullpen.  The scouts love this guy and compare him to David Wells.  We’ll all keep our eye on him this spring.
It’ll be interesting to see how Ryu adjusts to the MLB 5 man rotation.  We saw how difficult this was years ago for Kaz Ishii ten years ago, who never really was able to make the adjustment.  I’m hoping that this signing had more to do with the Dodgers asian scouting department being impressed with Ryu’s potential and not the marketing department’s excitement over getting the Korean community engaged with the Dodgers.
Chad Billingsley
He should have received Tommy John surgery because partially torn elbow ligaments don’t heal on their own.  I think it was a risky move and if he were to have the surgery today, he’d be ready for next year.  As it stands now, if Billingsley completely tears the thing or the injury worsens somehow after the season begins, we can kiss Bills goodbye until 2015.
It’s a shame too because he was pitching so well in August of last season.  I’m convinced that if Bills had been available in September, the Dodgers might have made the post season.  It speaks to Chad's character and desire to be on a championship club, that he risks his career for the opportunity to pitch this year.
Dave Stewart (Chad’s agent), knows pitching and I’m sure there is a method to their madness.  They must believe that he can pitch through this and be effective.  I hope they’re right, but if I were a betting man, I’d put my money on Billingsley landing on the D.L and being out for the season in the early part of the year.  Hope I’m wrong.
Josh Beckett
Boston fans warned us about Beckett saying he was a bad teammate.   They said his best days are gone, that he wasn’t dedicated to the game anymore, etc.  Truth is that he was awesome during the pennant stretch run.  As a number three guy, Beckett is a great pitcher to have.  And guess what?  He didn’t cause any problems either.
Beckett pitching in the NL West is helping his career.  The AL band boxes didn’t help him.  The rabid Boston fan base wasn’t in his comfort level.  Los Angeles is a perfect fit for him.  I really believe that Beckett is going to have a great year.  Possibly 18 wins.
Zach Greinke
Greinke impressed all of us with his baseball knowledge.  How many guys out there follow each teams minor league systems.  This guy is a cerebral type pitcher of the Greg Maddux ilk.  He wants to be here and the tandem of Kershaw, Greinke and Beckett can dominate.
A lot has been written about Zack and I don’t have a lot to add, other than I think this was the biggest free agent grab in the off-season.
Clayton Kershaw
There isn’t much to say about Clayton and volumes have been written already.  In my biased opinion, he’s the best pitcher in the National League.  I do have concerns about his health though.

We saw the hip problem surface at the end of the year and he suffered from plantar fascitis is as well.  I’m wondering if the hip problem was caused by Clayton compensating for the foot problem.  A healthy Kershaw means so much to this ball club.  Probably the National League West crown is a given if Clayton has another Cy Young worthy season again.
There you have it, 9 starters and 5 spots, (perhaps six if one becomes the long man in the bullpen).  In the unlikely event that all emerge healthy in Spring Training, I see Fife in Albuquerque, Capuano as the long man and Lilly and Harang as trade fodder.  A prolonged spring training due to the the World Baseball Classic will extend the competition and perhaps allow more opportunities for trades.  It's a nice problem to have and the Dodger starting staff is definitely the deepest in the Majors.  So much room for contingencies exist.  This may be the most interesting Spring Training we've experienced in years.