Duke Snider to be Honored 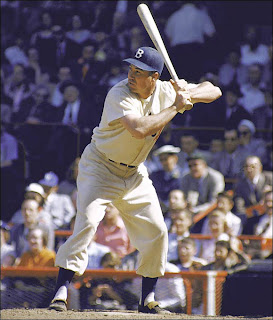 On Tuesday, it's full blown Duke Snider day at the Dodger Stadium.  Actually something I wish I could get down to Southern California to see.  Not only will fans get a rather impressive looking bobblehead doll of the Duke of Flatbush, but Snider's Hall of Fame Plaque is on loan from Cooperstown and is available for fan photos in Autograph Alley in Lot G. (from 5:10 pm to 6:30 pm).  Additionally, Duke's family will be on hand for pre-game ceremonies that will honor the Hall of Famer and his family.  Hopefully Vin Scully will be involved.  It would be well worth it to be in your seats early for the pre-game ceremony and tribute to Duke Snider. 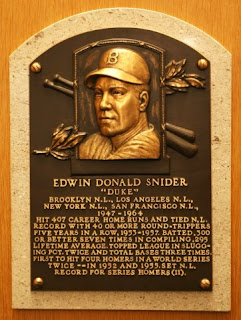 I recommend this fantastic blog piece on Duke Snider, written by Linda over at the Beyond Blue Eyes blog.  I'd say it was probably the best piece I read on the Duke after he passed away
LINKED HERE

Here are a few Duke Snider quotes that I thought were worthy of mention.


On the modern day player and their higher salaries:


“Man, if I made a million dollars I would come in at six in the morning, sweep the stands, wash the uniforms, clean out the office, manage the team and play the games.”  (Sport Magazine, April, 1980)
On baseball in general and the things that remain the same over the years:
"The sport to which I owe so much has undergone profound changes, but it's still baseball.  Kids still imitate their heroes on playgrounds.  Fans still ruin expensive suits going after foul balls that cost five dollars.  Hitting streaks still make the network news and hot dogs still taste better at the ballpark than at home." (New York Times, January 10, 1980) 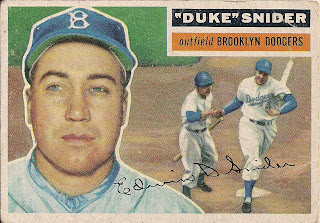 On player travel and team bonding:
"Today's baseball players are walking conglomerates.  They have fantastic salaries, multiple investments, but we had one thing they don't have today, the train ride.  We didn't always like it, but those rides kept us close as a team and as friends.  Something you can't get on a two hour plane ride that used to take you fifteen hours on a train." (New York Times, January 10, 1980)
Following the 1953 World Series loss to the Yankees:
"I still say we're the better team. That's the rottenest thing in life, isn't it?  The best team doesn't always win." (The Boys of Summer, Roger Kahn)
Last, this excerpt from Kahn's famous book:
I told Beverly (Snider's wife) Pee Wee Reese's favorite story.  Four players rode a car pool from Bay Ridge to the Polo Grounds in 1951, and on Reese's night to drive a motorcycle patrolman stopped them.  Approaching, the policeman burst out, "Pee Wee. It's you. Wjhy you driving so fast?"
"Big series with the Giants, officer. Kind of nervous."
"Don't listen to that, officer," Snider said.  "He deserves a ticket."
"Hiya, Duke," the cop said.  " Gee, fellers.  What a thrill for me.  Good luck, and take it easy, will ya, Pee Wee?"
Snider drove the next night and within a mile of the same spot another policeman sounded a short siren burst from Die Walkure.  Then he took Snider's license and started writing.
"Say officer.  That Edwin Donald Snider is Duke Snider.  I'm the Dodgers center fielder."
Without looking up the policeman said, "I hate baseball."  He handed Snider the ticket for speeding.
*********************************************************************
I took a step away from the baseball world to complete a demo on my front yard with my sons and son-in-law, before putting on what are close to the finishing touches of a complete front year remodeling.    Worked completed: driveway extension, laid concrete, created a retaining wall, put finishing touches on wall by applying stucco,  fill in behind it, tilled the soil, compacted soil, drove 125 miles to get sod, laid sod, installed fountain and electrical for fountain, installed sprinkler system.  A three week project that we are nearing completion on.  I only have a rasied flower bed in install and pavers stones to lay leading to the front porch.
I’m beat and sore, but it’s a good sore.  Work was accomplished and now, back to baseball.
Posted by Evan Bladh at 7:56:00 PM