I don’t write this piece to sensationalize things.  Certainly there are enough “gloom and doom” bloggers out there that are quick to condemn the team after a few losses.  This team is what it is, a streaky group that tends to be either real hot or real cold.  All you have to do is follow their track record.  Just when you think that have corrected things and are on the path to success, the offense goes into a funk and they reel off a  number of losses.  But that wasn’t what I wanted to write about this morning. 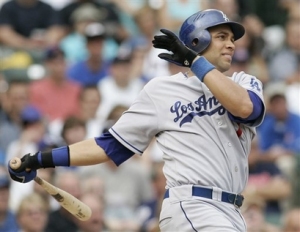 It’s about James Loney.  I think it’s time to pull the plug on him at first base.  As much as I think Logan White is a genius, I have to admit that the decision to convert Loney from pitcher to first baseman was a mistake.  As a prep he played both positions and excelled at each, so it wasn't an unforgivable mistake, but in retrospect, we all would agree that Loney hasn't developed as hoped.  James has had his offensive moments over the years, none greater than that NLDS grand slam against the Cubs a few years ago, but those moments have been few and far between.  He should have been a pitcher.  Good left handed starters are not easy to find these days.  James could have been a good one.
Loney’s power never developed.  He puts on these power displays in BP that can be awesome, but the reality is that he’s a punchless singles hitter with no speed.  Yeah he’ll have the occasional gapper now and then, but he is mostly an opposite field swinger that unsuccessfully attempts to drive the ball into gaps.  There is absolutely nobody that is going to want this guy next year.  There isn’t much of a market for good fielding first basemen with no pop and mediocre OBP.  And lately, the defense has been suffering.  It probably has to do with his struggles this year and the mental aspect of his game now.  You know he has to be wondering about his future after such a colossal collapse in 2012.

I say it’s time to make a radical move and complete what I call the “Reverse Ankiel” experiment with him.  Sign him to an incentive laden deal and send him to winter league ball as a pitcher.  Loney was one of the top rated prep pitchers out of Houston’s Elkins High School in 2002.  (9-1, 1.09 ERA, 106 Ks in 60 IP).  Many touted him to be a starting left hander in the majors one day.  Well that time has come.  It’s probably too late, but if a switch is ever going to be made, this off season is the time to do it.  He may never be a starter again, but who knows?  As a situational lefty he could be quite successful.
What does this team have to lose?  With all the money wasted on such busts as Andruw, Manny, Schmidt, Pierre and Uribe over the years, why not break out a few million to keep Loney in the organization and convince him that if he wants to continue his pro career, it’ll have to be as a pitcher.  Send him to AZ instructional league.  If he does well, perhaps a stint to the Dominican or maybe even AZ fall league.  In Spring Training let him work his way with the minor leaguers.  Yes, it’ll be humbling for James, but it beats sitting at home in Humble, Texas (or wherever that may be).
Let me add another wrinkle to this awkward proposition about Loney.  If he turns out to be valuable as a situational lefty, there is always the maneuver that can be made to keep James in the lineup as a positional player at first base.  Insert him as a pitcher to face a lefty, move him to first base when a righty come to the plate, and then return him to the mound when a left handed hitter comes up again.  I know this is thinking outside the box, but James could have some value with a creative manager that is willing to try some unconventional moves.
What do you think?
Posted by Evan Bladh at 9:56:00 AM