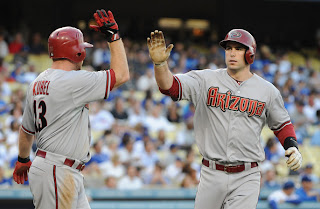 As far as streaks go, this Dodger team takes the cake.  From the high of highs on Sunday, the Dodgers are down in the valley again as the Diamondbacks completed a three game sweep today with a 4-0 shutout of the Dodgers in a businessman’s special.
Just as it appeared that the Dodgers had momentum in their favor as they entered a 9 game home stand, they fall back into old habits and see their offensive surge fizzle down to next to nothing.
The long ball destroyed the Dodgers these three games, and all that confidence that we had in a team that had turned the corner following a 7-3 road trip has returned back to concern.  Stephen Fife has replaced Nathan Eovaldi as the hard luck loser that never gets any run support.  Chris Capuano and Aaron Harang have resorted to their old “long ball surrendering” selves and suddenly the front offices failure to land Ryan Dempster appears to be a big mistake.
Paul Goldschmidt almost single handidly defeated the Dodgers, compiling 8 hits , 2 homers, 5 RBI and 4 runs scored in the three game series.  A bit of bad blood between the teams may have been rekindled as Goldschmidt took a Javy Guerra fastball in the ribs following his eighth hit in thirteen appearances.  That was followed by Goldschmidt taking out Jerry Hairston Jr. on a rough slide to break up a double play.
Steve Lyons reported on the post game show that Hairston was steamed about the slide and felt it was Arizona’s way at retaliation, but replays showed that it was a clean hard slide. At least that's what I thought initially until I reviewed it again and realized that Goldschmidt started his slide past the second base bag. There is no love lost between these two teams, dating back to last year’s Gerardo Parra-Hong Chih Kuo incident.  It’ll be interesting to see if this little mini war continues as the season progresses.
The Dodgers need to concern themselves with other things though and right their ship.  Arizona has now taken six straight from Los Angeles and they’re back in the thick of the race, only 1 1/2 games behind the Dodgers in the standings.  Kirk Gibson has his guys feeling good about themselves and prepped to make a strong run at the division title.
Posted by Evan Bladh at 5:06:00 PM