So Mattingly gets a two game suspension. All things are hinting towards Kemp getting none, meaning he gets time served for being tossed from Thursday's game.  The question remains "How many games will umpire Angel Campos be suspended for?"  MLB isn't announcing that one.  Since he is not a member of an MLB umpiring crew, perhaps his blunder will affect him being called up as a MLB umpire permanently.  If that's the case, then Campos is the one that is punished the most of the three. 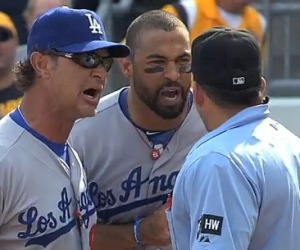 I hope this is a lesson learned for the three of them.  For Campos, to not have such "rabbit ears" and the quick trigger.  For Kemp, arguing is fine, but going ballistic and bumping umpires in the heart of a pennant race will not serve the team well.  For Mattingly, uh- gee, can't seem to figure that one out.  He defended his team.  Something that he predecessor (and coincidentally, the one from MLB that handed out the punishment), didn't seem to do hardly at all.  Make that a lesson learned for two of the three.
Come to think of it.  The one guy that probably shouldn't have been punished in my estimation, is the only one that did.  Shows how much I know.
Mattingly starts serving his two day suspension today.