Happy Birthday to the King 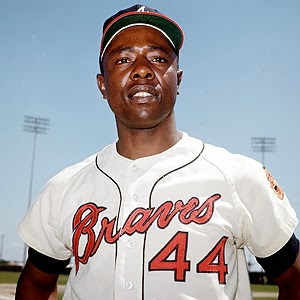 Happy 80th birthday to Hammerin’ Hank Aaron, the true major league home run king and unofficial Dodger killer during his 22-year major league career.  Aaron hit .372 lifetime off of Sandy Koufax going 42 for 113 with seven home runs.  Against Don Drysdale, he homered 17 times, the most homers Big D gave up to any hitter in his career.

Walter Alston summed up how he felt facing Aaron when he said that “more than anyone else, he’s (Aaron) made me wish I wasn’t a manager.”

Looking at Aaron’s splits against the Dodgers, it can be confirmed that he was not just a Dodger killer, (as I remembered him), but it’s fair to say that he hit against everybody.    National League opponents didn’t have a prayer at shutting down Aaron.  From the Cardinals to the Giants, Pirates to the Cubs, Mets to the Reds.  Aaron mashed against them all.

Henry Aaron had the hitting philosophy to be looking for the breaking ball because he had no problem hitting the fastball, even from fireballers like Gibson and Koufax.  It worked wonders for him too.  His quote from after his career ended confirmed this:

"I looked for the same pitch my whole career, a breaking ball…I never worried about the fastball.  They couldn't throw it past me, none of them."

Imagine that, having the bat speed to adjust to a 100 MPH fastball and being able to hit it out of the park while looking for the breaking pitch.

Other quotes about Aaron of interest:

(Just before hitting his record setting 715th home run) “He told me I’m going to hurry up and get this over with.  It was a cold, cold night in Atlanta, in April.  And Hank got it over with.    And I was up next, and on the way up to the plate, once they resumed play.  I heard a bunch of clanking.  Clank, clank, clank, clank.  I looked around and everybody was leaving.   They were going home.  They had come and saw what they came to see.   They didn’t come to see me.” - Dusty Baker

“As far as I’m concerned, Henry Aaron is the best player of my era.  He is to baseball the last fifteen years what Joe DiMaggio was before him.  He’s never received the credit he is due.” - Mickey Mantle