Carlos Marmol, Brian Wilson, Edinson Volquez and now Michael Young.  These are all acquired players that have come to the Dodgers well after they began their astounding second half of the season run.  Were these necessary moves to put the Dodgers in a position to advance far in post season play?

The Dodger bullpen has been one of the best in all of baseball since June 22nd.  The addition of Marmol and Wilson has strengthened the relief corps even more, but how important was it for the Dodgers to mess with what was already a team strength at the risk of changing a team chemistry that was already working?

So far, the change seems to have worked well and the Dodger bullpen is stacked.

The addition of Edinson Volquez serves as insurance in the starting pitching department as it provides the Dodgers with another starter in the final weeks of the season.  This will give the top four guys some extra days rest as they head into the playoffs.  Even if Volquez fails, he'll eat up some innings and allow the other guys some time off.  There really isn't any major damage that can be done with the Volquez acquisition.

The perplexing move I find is today's Michael Young deal.  This is a guy that Colletti has coveted for some time.  Now 36 years old and in the twilight of his career.  Young, a West Covina native is heading back home to play before friends and family during what may well be the most exciting Dodger season in decades.  Young, like Ricky Nolasco who was acquired in June, must be thrilled with that opportunity.  The problem I see with the Young move is that it may mess again with the chemistry of this team. 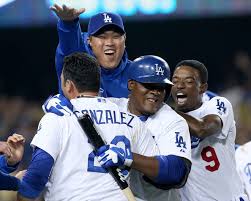 Juan Uribe has been the consummate team guy.  He's respected and well liked.  He's had his best season in years and as a Dodger.  A magnificent glove man at third base and a bat that has surprised all of us this year.  What does the Young acquisition do for Uribe's psyche?  Uribe is a leader on this team.  He's kept Puig's head in the game and he has made Hanley a happy player at shortstop too.  Uribe brings intangible qualities that boost team morale.

Did Colletti just mess with a major ingredient that is responsible for the Dodgers winning formula?  I have to believe that this team is better than that, but I guess we'll find out.

Tonight's win brings the Dodger magic number down to 18 for the Western Division title.  There are 27 games remaining.  It was another thrilling come-from-behind win that is becoming all too common for the Blue crew.  The Dodgers finished August with an L.A. team record 23 wins in the month.
Posted by Evan Bladh at 12:11:00 AM