Remember when there was an All Star game this year and only ONE DODGER was on the roster?  Seems ridiculous now thinking about it.  What is even more ridiculous is that there were 5 Giants on that team. Thanks for the home field advantage Bochy.

Remember when we were thinking about the Dodgers getting an awesome draft pick for next year?  I guess that ain’t gonna happen.

Remember when we constantly talked about how snakebit this team was with injuries and that there were some calling for Sue Falsone to be fired?  Now there is talk about giving the team MVP to Falsone for the work she has done to keep so many players on the field.  She and her staff have been truly remarkable.

Remember when the Dodgers couldn’t score any runs for Clayton Kershaw?  Yeah, we all do.  Don’t get too excited by the 7 run outburst in Colorado for him, it was just one game.  He still has the second to worst run support in the league.

Remember when Dodger fans wanted the team to exact revenge on Carlos Quentin for the Greinke brawl?  I don’t know about you, but I could care less about Quentin and the whole Padre team for that matter.  The same could be said about the D-Backs and payback for that brawl in June too, which was started by Kennedy, who ironically is now a Padre.

Remember when the team had about 12 starting pitchers in Spring Training and then the number dwindled down to like 1 and a half in mid April?  I guess the starting pitching problems are more than solved now.

Remember when Justin Sellers was starting at shortstop on opening day for this team?  Yes, that was this year, not last.

Remember Luis Cruz and the patience Mattingly had with him, game after game?  Poor Luis.   He did break the .100 mark before he left us though.   I hope he gets voted a full post-season share.   He was a good person and a hard working Dodger.  Sometimes all the hard work in the world doesn’t pay off.

Remember when the N.L. West had four teams over .500 and the one team that wasn’t was the Dodgers?  My, how the tables have turned.  The D-Backs may soon find themselves under the break even mark, which would mean that everyone’s roles completely reversed in three short months. 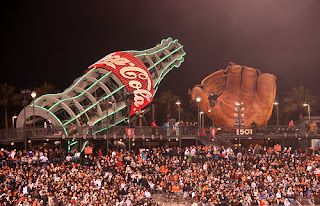 Remember when the San Francisco Giants were the defending champions?  Wait, they still are.  I guess a 61-77 record and being 22 games out of first place kind of makes you forget that they won it all last year.  It's so heartbreaking to see how far they've fallen, isn't it?
Posted by Evan Bladh at 11:31:00 PM