A New Loge Option for Families and Groups

The Loge level at Dodger Stadium has always appealed to me.  With its bird’s eye view of the action. It's not too high up and it's close to the field.  I like that it is prime foul ball territory having perfect angles and sight lines.  I’ve sat in virtually every level and many sections of Dodger Stadium throughout my lifetime and I’ve been in over 20 major league ball parks across the nation.  If you throw in Spring training and minor league venues, it's safe to say that I’ve probably seen baseball action in close to 100 Stadiums nationwide.  With that said, the Loge section at Dodger Stadium may be my favorite place to watch a game.

The Dodgers with their massive reconstruction and Stadium enhancement projects have added a new feature to the Loge section that may be their best idea yet.   These are Loge Party Boxes behind the seats and under the overhang.  These open air boxes provide a unique viewing experience to fans attending games in groups.

When I was afforded the opportunity to take in a game at this location, I jumped at the chance.  How eager was I to do so?  Eager enough to drive 389 miles, take in the game and drive 389 miles back that same night/early morning.  It was a long arduous 20 hours AND well worth it as my 24 year old son (who accompanied me) and I took in Hyun-Jin Ryu’s 2-hit shutout of the Angels.

The Loge box we were in seated a party of six, though David Seigel, Dodgers Vice President of Ticket Sales advised us that some boxes could accommodate larger groups. 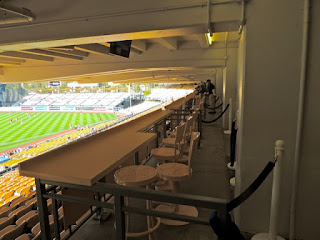 Complete with table tops, comfortable barstools (with seat backs), and  an elevated platform to give the viewer a cozy view of the action on the field, these boxes included an attentive server that checked in with us every other inning or so to provide concessions upon order.  “I really enjoyed  that I didn’t have to miss any action to buy food,” said my son, Evan Jr., “just hand him the credit card or cash and the Cool-a-Coo or Dodger Dog would be delivered in a matter of minutes.  It was great.”

And though the over-hang partially obstructed our views of the scoreboard, the Dodgers thought that problem through and provided flat screen TVs above each box.  It was a feature I really enjoyed because the three second delay that the networks have put in place allowed us to see the action live and then immediately see it again in the flatscreen above us.   Answer me this.  Have you ever been at a game and wanted to see a replay of the action immediately after watching a live play, only to realize you don’t have that luxury at the live event?  Well the Loge Boxes provide that unique feature that can only be enjoyed in the Club Level Suites inside and at not nearly the price of the suite. 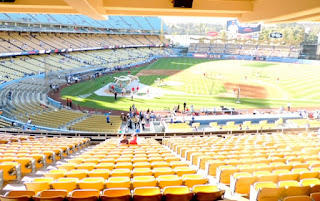 Frankly, this idea may be the best kept secret to the recent restoration project at the Stadium.  Not many can afford to take their family to a game in a club level suite, but a Loge party box provides some of the amenities of the club suite (i.e., an attending waiter, flat screen TV) and a close to the game action that provides the fan the unique more intimate perspective to game viewing.

For years I have always felt that the Dodgers cater to families better than any professional sports team in the region.   A family can take in a game together and bond over Dodger baseball.  The Loge Boxes further enhance that concept.  There is a privacy element to the area that entitles you as the fan some personal space that regular seats do not afford.   Additionally there is space to lay out your belongings and a table to use and even an electrical outlet to plug in your laptop.  This is a unique feature to the box that will really serve fans well once the stadium Wifi is up and running in the next month or so.

By no means am I saying that the Loge boxes are like club level suites, but then again, they shouldn't be.  You enjoy the connection, camaraderie and kinship with surrounding Dodger fans taking in the game.  At the same time there are privileges and privacy that you gain by having barriers and tables that other fans don't have due to space constraints at assigned seats.

I seriously will consider reserving a Loge box in the future when attending a game with my brother and his family.  There are advantages of comfort and space that you simply don't get at assigned seats,  It's also an ideal spot to see a day game since all of these boxes are located in the shade.

A great idea by the Dodgers.  Check them out before they become so popular that availablity becomes an issue.
Posted by Evan Bladh at 8:44:00 PM