In Your Face Angels! We Got Harang! 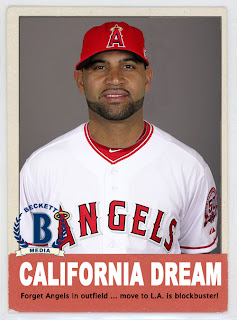 As the Angels announce the blockbuster signings of CJ Wilson and Albert Pujols for $300 million plus, the Los Angeles Dodgers announced the signing of Aaron Harang to a 2 year (plus vesting option for a third) deal.
So just when you realize that the Angels are back in the headlines, the Dodgers steal some Halo thunder from them by announcing that Dana Eveland was dealt for two prospects to the Orioles.  One of the prospects coming, Jarret Martin, is a left starter with some upside.
Gotcha Anaheim!  I guess Kendrys Morales may be on the block now.
**********************************************
USA Today’s Bob Nightengale announced that Miami offered Pujols $275 million, meaning that Pujols left $20 million on the table to not play in Florida.  Additionally, with no state tax in Florida, he actually is out about $50 million by signing with the Anaheim club.
Things are blowing up in Miami.  Two days ago, it looked like they would have Jose Reyes, Pujols and Hanley Ramirez in the infield.  Now, Ramirez is demanding a trade and they may end up with only the injury prone and erratic Reyes at short.
**********************************************
There is a lot of baseball news today.  A few bullet points: