I was talking to my 22 year old son the other day, about what we often talk about - The Dodgers.  I got to thinking that I am really getting to be old.  My son, who was born the year after the '88 World Championship team, was clueless about so many things Dodger and see things from such a different perspective than I do.  He has never seen a Dodger team advance beyond one round in the post-season.  I have come to accept that I'm an old Dodger fan.  I list several memories and recollections that prove that point.  Here they are.  For my fellow Dodger Codgers, feel free to add others.
You know you’re an OLD Dodger fan when: 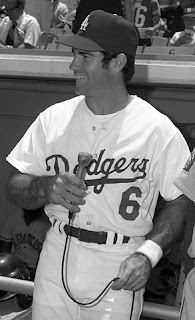 You realize that Matt Kemp, Andre Ethier, Clayton Kershaw and Chad Billingsley were all born AFTER Steve Garvey wore a Dodger uniform for the last time.


You see players celebrating with a congratulatory "high five" and it brings you back to 1977 with Dusty Baker and Glenn Burke.


You think back to a time when  Dodger Stadium had red crushed brick as an infield dirt and that was probably the best looking and hardest infield in the majors.  The Dodgers kept it up until Walter O'Malley died, because the old man thought it looked nice. 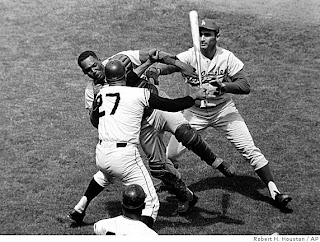 You recall that the only games we'd see televised where from Candlestick Park against the Giants.  The only time a home game would be televised was if it was the end of a pennant race in late September and O'Malley was assured that the game was sold out.
A post season trip would always be followed by a Dodger team that would tour Japan.  And there was no union that opposed such a move.  Maury Wills' refusal to participate in the series resulted in his trade to the Pirates.
Bob Mitchell and Helen Dell are names that come to mind when thinking of the Dodger Stadium organist.
You remember when the left field pavilion message board, with amber lighted messaging that said “Charge!” or “Go” was state of the art and by far the coolest one in the majors.
You consider Don Mattingly a Yankee, Joe Torre a Brave, Tim Wallach an Expo, Mike Scoiscia and Dusty Baker - Dodgers and you wonder is there anybody left out there that will remain loyal to one organization ever again.
You think back with fondness of Maury Wills  getting on base and the stadium would become electric with chants of “Go,” “Go.”  And most of the time, Maury would oblige.
You recall that complaints about the Dodger announcer wouldn’t be about Charlie Steiner, Steve Lyons or Eric Collins.  Jerry Doggett would be the guy we’d complain about.  What it comes down to is that nobody sounds decent when compared to Vin Scully.
The smell of cigar smoke brings you back to recall sitting on the Field Level or Loge at the Stadium.
You remember rented seat cushions being tossed on the field once the games ended.
The promotion games were bat days, ball days, helmet nights and cap nights with a giveaway cap that was identical to what the players wore.
Hollywood Stars Night would bring out the likes of Jackie Gleason, Cary Grant, Bob Hope, Bob Newhart, Don Rickles, Dean Martin, Kareem Abdul Jabbar and Billy Barty.  AND they played hardball, the bases were 90 feet and no fences were brought in.
You recall that annual oldtimers day was a wonderful day at the ball park and something that was well participated in and well attended.
It was an extremely rare occasion when an opposing player was "booed."

The buzz and electricity in the stands was palpable when Big D or Sandy took the mound.
"Three Dog" was in center, "Rosie" was behind the dish.  "The Vulture" swooped up saves and "Sweet Lou" would chant we're going "all the way with Sandy K."
You recall the days when you’d eagerly retrieve the L.A. Times from the driveway first thing in the morning to read about last night’s game.
You dreamed of eating a steak in the Stadium club while watching the game.  It was always a mystery to me how great that place must be while looking up at those glass paneled windows overlooking the right field line.


You miss the Herald Examiner and its Dodger coverage and you realize that it has been gone now for over 22 years.
You attended a double-header, and the ball park wasn’t emptied out between games to allow the ownership to collect two admissions in one day.
Frank Howard was the biggest man you ever saw step into a batter’s box.
You realize that Davey Lopes is 66 years old, Maury Wills is 79, and Walter Alston would be 100 if he was alive today.
Your memories of Billy Bucks was of a fearless leftfielder that crashed into walls making fabulous catches.  Always hustling and stretching singles into doubles...not the far removed gimpy first baseman that made the error in the '86 World Series.
You realize that fellow bloggers that are highly respected such as Jon Weisman and Eric Stephen are much younger than you.  And you have kids older than Roberto Baly at VSIMB.
You realize that Dodger beat writer Dylan Hernandez was in third grade when Kirk Gibson hit his Game one homer in 1988.

You miss the great L.A. Area sports writers and columnists: Bud Furillo, Ross Newhan, Bob Hunter, Rick Tally, Alan Malamud, Mel Durslag and the great Jim Murray.  You realize that the majority of Dodger fans out there today have no idea who you are talking about when you mention them.  Imagine that, never living on this earth without experiencing the joy of reading a Jim Murray column.
Posted by Evan Bladh at 7:42:00 PM