Perhaps the signing of Chris Capuano over paying huge money to Kuroda wasn’t such a bad idea.  Eric Seidman at fangraphs.com compares the two and is saying that the Dodgers may just have the get the same type of production and numbers from Capuano as they would for Kuroda, at a much cheaper price.
LINKED HERE
***************************************
Reading over the past 24 hours of Magic Johnson’s interest in buying the Dodgers and his excitement at recruiting high priced free agents does get my juices flowing with excitement, but we really have to think of the big picture.  Magic’s quote that he’d be at Pujol’s home recruiting him right now if he owned the team sounds fine and dandy, but a 34 year old Pujols being offered a 10 year deal  at $300 Million doesn’t sound so good.  And I could see Magic dangling something crazy like that in order to land him. 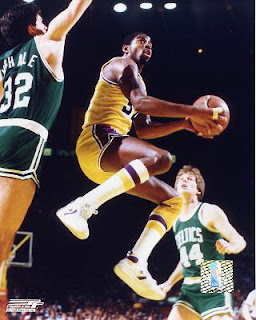 Here’s my point.  I think the average blogger has more baseball sense than the great Magic Johnson.  I could be wrong, but I doubt it.  If Magic lands the team, it sounds like he will meddle in baseball decisions, and there’s nothing worse than a  non-baseball man getting involved in major baseball decisions.  We saw it first hand in 1998 with Chase Carey, the Fox executive, that cut the legs out from under Fred Claire and dealt Piazza away.
Now Magic has his heart in the right place.  He wants to win and that gets me excited.  Unlike Carey, his concerns appear to be those of putting a championship team on the field.  His financial backers, the Guggenheim group,  are worth billions, and that is even more exciting.  But I would hope that Johnson would surround himself with sound baseball minds, (and I’m not talking Tommy Lasorda).  My hope would be that a Billy Beane or even a Dan Evans type would be in place, or Logan White promoted to the top spot.  It seems to me that Magic is intent on  buying a title through signing big name free agents without looking at the big picture of the entire franchise, from the minors on up.
The Dodgers need to heal.  They need to redevelop the Latin American market and international scouting again.  They need to expand their prominent core aside from Kemp and Kershaw and fill holes at many positions.  If Magic Johnson’s group gains ownership, I would hope that Johnson uses his business savvy to fortify the entire organization and looks at the big picture overall, (and that his purchase includes the parking lots so we can rid ourselves forever of Frank McCourt).
Posted by Evan Bladh at 12:17:00 PM