If there is any doubt about Dave Roberts as a strategic manager after leading the Dodgers to the divisional title, I will point to game 1 of the 2016 as proof that this man knows how to make the right moves under pressure.  There were some critical decisions made that many of us questioned during the game, but Roberts stuck to his game plan and as a result, the Dodgers took a 1-0 series lead. 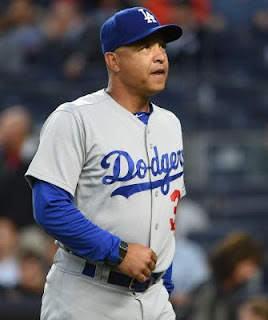 Kershaw
Clayton Kershaw had nothing working.  The radar gun is the witness.  Kershaw's fastball was as hard as he's thrown it all year, but it was missing spots.  His sinker was off kilter,  His curve was inconsistent.  Then he has the 3/4 side arm thing that wasn't doing much.  Even after striking out the side in the first inning, it could be see that Kershaw was struggling as he went deep in counts and exposed his entire arsenal of pitches in the first inning.  Kershaw's pitch count was up and they were high stress pitches from the get go.

With a 4-3 lead in the top of the fifth and his pitcher's place in that batting order come up, I was all for pulling Kershaw after four innings of work, but Roberts had a plan and a 4-inning Kershaw start wasn't it.  He stuck with his ace, and even though inning number five provided another tightrope walk for the 3 time CY Young award winner, Roberts allowed him to continue and work his way out of it. This was classic Kershaw striking out Danny Espinosa with the tying run on third with his best curveball of the night as he closed out the 5th on his 101st and final pitch.

Double-switchamania
There are those that can argue that Toles is needed for defense over Kendrick at the end, and the same with Utley over Culberson.  Well, neither of these switches came back to bite Roberts in the behind and the Culberson move might have saved the game as he made an amazing snatch and tag on the Daniel Murphy steal attempt in the bottom of the seventh.  It might be the most under-rated play of the game because a lot of time that catch and tag from the errant throw is simply not made.

Bullpen Usage
Roberts has had plenty of practice this year, as starters going 5 innings was often times the norm.  In any event,  the usage of Blanton, Dayton, Baez and Jansen for the 5 out save was masterful.  There are those that will argue that by going with Jansen for the long save, Roberts put himself in a position that he might be forced to bat him in a crucial situation, (which turned out to be true).  I will argue that Jansen was 7 hitters away from being used as a hitter when he was brought in, and sometimes those are the risks you take.  In the end, Roberts had his ace closer in the game facing the dangerous top of the order.  That's exactly what you want and it turned out to be the difference.  Kenley had his grade A stuff for game one.

Mental Preparation
Dave Roberts reached out to former Laker coach Pat Riley earlier this week and a few minutes before the game.  How can that not hurt?  He is treating this post season as a championship manager, seeking guidance from winners and applying philosophies and strategy that has worked for him.