As Dodger Fans...This is What We Live For

(While I mention Werth, I just want to remind everyone that when Ned Colletti let him walk after an injury plagued season due to a broken wrist that never healed, I knew it was going to come back to bite us.  Werth is that rare type of hitter that seldom strikes out, works counts, and isn't afraid to go with a pitch and lace it to right field.  Our front office let him walk in favor of signing Luis Gonzalez ten tears ago, and he was making the major league minimum at the time).

Anyway, back to the series... 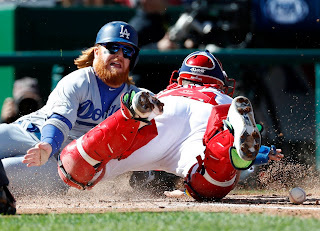 We live for this.  Or should I say "die" for it?  It's time to be honest.  Do we really enjoy post season baseball?  I know I don't.  These games are about as enjoyable as a root canal.  During the regular season, your team loses a game and the mentality is, "we'll get 'em tomorrow," because there's almost always a tomorrow in a 162 game season.  In the playoffs?  There rarely is a tomorrow and there definitely are consequences to losses.  Every pitch is magnified, every call from the umpires crucial, each mistake made by a manager augmented.  You can multiply the enormity of it all ten-fold and it doesn't do justice to the importance of it all.

So here we are, ready to watch our "one game season," vs. the Nationals.  Odds don't look great.  We have about 10 different arms available to take on Scherzer.  Based on how things have gone so far, we'll need everyone of those arms, (except those that belong to Maeda and Baez).  The Nats have a solid lineup.  Trea Turner - practically an automatic run each time he gets on.  Harper - a former MVP and threat to put a pitch in the bleachers every at bat.  Werth - absolutely clutch.  Murphy - possibly the greatest post season hitter I have seen.  Rendon - a constant danger with tremendous power.  Zimmerman-having a down year but a player that can't be taken lightly.  There are two holes:  Espinosa and the catcher spot.  Not a lot of room for error and the Nats have made the Dodgers pay.

Washington is a good ball club that is where they are for justified reasons.  95 wins happened for a reason.

The Dodgers certainly haven't been world beaters of late, but we know the talent is there.  Here we are, tied at two games a piece in a series that statistics will tell you the Nationals have dominated. That domination can easily be tossed aside with a good day at the office tomorrow.  The only stats that really matter have to do with the amount of runs crossing the plate at the end of the day.

The Dodgers backs are against the wall, but if they break out to a lead, we'll see a Washington team forced into a corner.  Will Dodger pitching finally solve the Daniel Murphy puzzle?  Can they keep Trea Turner off the base paths?  Will Jayson Werth be contained?  All the above needs to occur for the Dodgers to have a chance.