Opening Week and OKP on the Ultimate Road Trip Hiatus

There are probably those of you out there that are wondering why the activity on this blog went.    The season starts and the the posts on OKP vanished.  There's a ton of Dodger news out there and OKP is producing nothing.  Patheric, I know.  Opening Day and I've got nothing.

A few weeks back I explained that I would soon be relocating to the east coast. Well, this week turned out to be what I call the "ultimate road trip experience."  My job transfer occurred at the worst possible time for a baseball aficionado.  Opening week for me has been a 2,850 mile trek from west to east in some of the most treacherous driving conditions that I ever experienced.  On Tuesday, April 1st I finished packing up my stuff and loading it into my VW bug and I drove across the country from California to Washington, D.C.

This sounds like something you'd do in your early twenties, but I did it at age 52 and at a crossroads in my career.  It is truly an adventure and as I enter my new workplace this coming Monday, is is with some trepidation and concern, but in the end...it'll be a growth experience as I enter the last five years of my career.

It was no April Fools day joke that I took off this day, but then again, maybe I should have seen it as an omen for what was to come.  The Dodgers were pretty far from my mind and though I was able to listen to two of the three games from San Diego as I meandered my way through California, Nevada, Utah, Wyoming, Nebraska and Iowa, it was the weather that was truly my major concern.

Stopped on the Donner pass west of Truckee,CA and forced to put chains on my car, I trudged through the California Sierras on my way east.  It took 6 hours to get through a region than normally takes only 1.5, and the trip was off to a lackluster start. 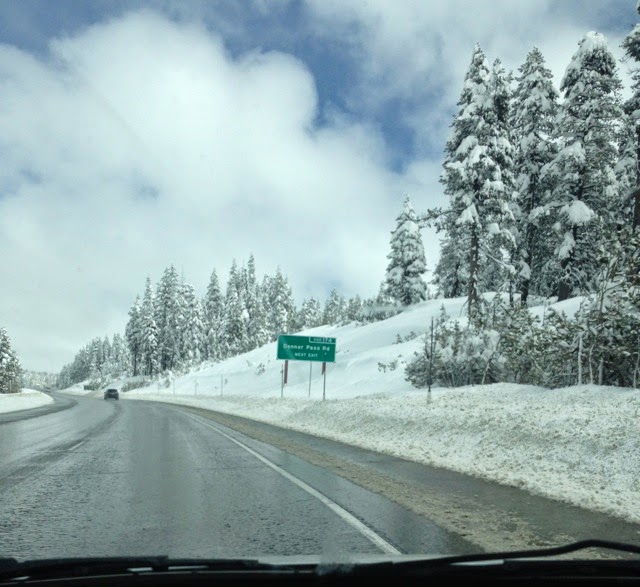 The goal was to reach Green River, Wyoming on the first day, about 1/3 of the way to my ultimate destination. By the time I reached Winnemucca, Nevada, I was fairly sure that was an unrealistic expectation.  What followed was one of the most nerve-racking drives of my life.  Wind blown snow driving straight into my windshield as I headed east towards Utah.  I could barely see the broken center line on that very dark night, which worked fine until the occasional speeding 18 wheeler would blast by me at speeds in excess of 80 mph.  What a relief it was to see the snowfall dissipate by the time I arrived at Wendover. NV., and all the while this was happening, MLB.com on my i-phone transmitted the Dodger's Tuesday night win in San Diego.  I even got sporadic images of live action through MLB TV on the phone, which was quite a treat.

I settled in Park City, UT at about 12:30 am.  About 180 miles short of my intended destination, but I figured that with about 5 hours sleep, I could get up early and make up for the time I lost.  What I didn't count on was the tumultuous weather ahead.

Day Two:
With the Dodgers record standing at 3-1, I departed Park City at 7:00 am being fully aware that I was in for a Wyoming winter storm on I-80 in the first stages of spring.  With chains in the trunk, I was simply hoping I could weather through this trek without having to complete the tedious tasks of re-installing those things in freezing weather.

The VW was running like a champ and when I passed through Green River, WY (more original first day destination) at about 9:30 am, my satellite imagery on the I-phone assured me that things would be a bit dicey ahead.  But I made it.  There was strong winds, sleet, snow, some black ice and truck after speeding truck making their way through the region, but my tough little beetle pulled past Laramie and Cheyenne without incident.

Arriving at the Nebraska state line there was a relieving blue sky ahead.  My goal was to make it on through Nebraska into Des Moines, IA after a 14 hour drive.  Well, I didn't make it in 14, but 15 did the trick.  What may have been the toughest part of the trip was finding my booked hotel that wasn't along the interstate and caused a rather tired and frustrated traveler to drive around in circles for 30 minutes before finding it and turning in again past midnight CST.

Day Three:
The Dodgers won the final in San Diego the night before and though I had driven through clear skies in Nebraska, the coverage was a bit spotty over the satellite.  I'd switch between Charley Steiner and Jaime Jarrin when buffering for a connection would occur in order to get the transmission.  But L.A. moved to a 4-1 record by the night's end.

I started out this Thursday morning (April 3rd) early again at 7:30, aiming for the Pennsylvania/Ohio border by nightfall.  I learned something about the U.S. interstate system on this day.  I have a new appreciation for California freeways.  They are called "freeways" because they are FREE.  By free I mean, it doesn't cost a dime to drive on them, which is the last thing I can say for Illinois, Indiana, Ohio and Pennsylvania.

Between the four states, about $80 was shelled out in tolls.  You'd think that with those tolls collected, they'd be able to maintain immaculately smooth roadways.  Well, not quite...right Indiana? Though this was my shortest driving day, (only 13 hours), the incessant rain and thundershowers made it another treacherous trip.  Combine that with the traffic from suburban regions of Chicago, Cleveland and Pittsburgh and I was a nervous wreck by the time I rolled into my final hotel in Monroeville, PA at 10:00 pm.  I was now just four hours from my new home.

Oh, and the apartment I had arranged to rent the week before was rented out from under me that day as the landlord sent me a text advising that she couldn't wait any longer and had found a tenant that signed a lease that day.

Day Four:
As I turned in the night before, weather forecasts announced a possible winter storm warning by 8:00 am.  What I thought would be the first day I'd sleep in was far from it.  I was going to beat that storm out of town and try to arrive at DC before snow stopped me in my tracks.  After all, I needed to find a place to live now, and quickly.

A 6:00 am departure was in the works and my 4 hour drive to the nation's capital was rather uneventful.  I set up two apartments to look at.  Then there was a room to rent in another area in Northern Virginia.  My wife remained behind in California as she hasn't been able to swing a job transfer yet, so it was decided that I'd find a small space to rent at minimal cost.  Apartment one was essentially a borderline slum.  A basement apartment in a relatively seedy area.  Apartment two, a little better, but too costly.  My third option was a room to rent and the landlord called.  It was a good fit.

It was 4:30 pm and I was signing documents when my I-phone chimed.  An MLB update: First inning, Giants 6, Dodgers 0.  Ugh!  Maybe it's best not to follow the team today.  This is one day I'm happy to not b in San Francisco.  It's time to move in.  Maybe after settling down next eek, I'll be able to get back to baseball.  For the time being though, the link list to the right might be the way to go.  I barely had time to even look at that.

So anyway, that's my week and excuse for the lack of Dodger related posts.  I'm hoping to start things up again this coming week, but things are a bit unpredictable with all the life changes in play.  The next adventure will be watching Dodger baseball from the Eastern Time zone.  The challenges never cease.
Posted by Evan Bladh at 9:32:00 AM