A Look at Dodger Injures. Is It Bad Luck or Too Many Risky Contracts?

As the Dodgers entered the 2014 season, prognosticators in baseball circles overwhelmingly predicted them to take the division.  With the core of players they have and the record setting payroll, it made sense.  They were returning from a successful 2013 run that left them a few games shy of the World Series.  Los Angeles was seen as the dominant team in the NL West "IF" they stayed injury free.  That "IF" we are finding for the second consecutive year to be a gigantic "IF."


Kershaw, Wilson, Crawford, Greinke, and Haren have all been sidelined for substantial periods since March 1.  Then add to that Matt Kemp, Josh Beckett and Chad Billingsley being out for substantial periods due to off season rehab programs following surgery.  The Los Angeles Dodgers have a repeat of the MASH unit that they were last season and it's only one week into the season.

They overcame those problems last year, for the most part, but one can't help wondering what would have happened had Matt Kemp and Chad Billingsley been available for the playoffs.  (We all know that Hanley Ramirez's broken ribs doomed them in the NLCS).  We are also being unrealistic to expect a winning string of 42 out of 50 games during any stretch this season.  The Dodgers simply can't bury themselves early as they did last year.

So is this injury rut simply a run of extremely bad luck?  Are the Dodgers signing players with risky medical histories?  Is it that the Dodgers are doing something wrong in the medical arena?

I don't have the answers and a lot of us can't pinpoint the exact problems, but its fairly safe to say that there is a lot of speculation going on.

Risky Medical Histories
When you work out a trade that includes a player going under the knife with Tommy John surgery the night before, I'd say that's a risky proposition.  That's what Ned Colletti did when he made that late August, 2012 trade with Boston where Josh Beckett, Carl Crawford, Adrian Gonzalez and Nick Punto joined the club.

Crawford had struggled for two years, gained weight, and had a bum throwing arm.  It wasn't realistic to see him return to his former glory being on the wrong side of age 30.  Add to that his enormous contract that pays him through the 2017 season at over $20 million a clip, when he'll be 35 years old. That was a bad deal, no doubt about it, and in the end it log jams the guys advancing in the minors, like Joc Pederson. 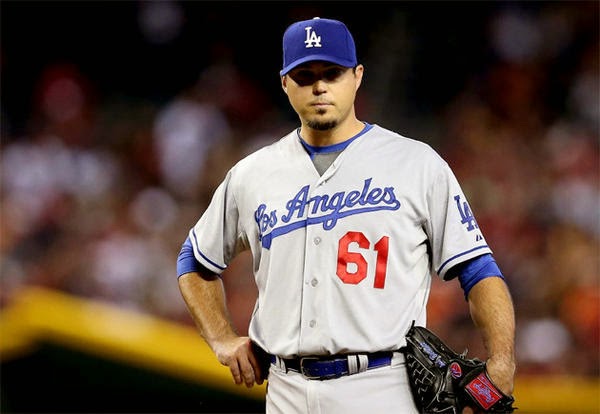 Josh Beckett arrived at age 32, already with a deteriorating fastball and suspect stuff.  Now we read that he hadn't been physically right for years, with a loss of feeling in his hands that culminated into his season ending surgery last season to remove a rib (thoracic outlet syndrome procedure) and get him back the ability to throw without pain or numbness.  Now at age 34, he's suffering other maladies like ankle sprains and doors closing on his thumb.  It's bad luck, it's age related stuff and that combination is never good.

Chad Billingsley and Clayton Kershaw have thrown a lot of innings in their young careers, and it makes you wonder how long young guns can throw before eventually having to go under the knife.  In Bills case, that was answered in 2012 at age 27.  For Kershaw, you've got to wonder, as he has led the league in innings pitched over the past three seasons.

Clayton hasn't suffered arm injuries as far as we know, but are they looking at a high risk proposition with him, especially since he signed that record setting deal this off season?  You bet they are.  Watch Kershaw closely this season.  Mechanics are a key to his longevity and a serious back ailment can mess with them.  This is a player that is key to the Dodgers long term success.  A guy that comes around once every thirty/forty years.  They have to keep him healthy.  If that means sitting him until he's 100%, then so be it.  There is too much money and franchise future dependent on that left arm of his.

Phooey to Consecutive Game Streaks
The days of players like Steve Garvey and the great Cal Ripken are gone.  In fact, as the years go by, my admiration for what Ripken accomplished (and the Garv too) grows exponentially.  There will never be a player that comes near that consecutive game streak record and it's about as untouchable as any in baseball.  The game has changed so much and freak things happen all the time that keep players out of lineups.  Teams invest too much money in players now to run them out there everyday. 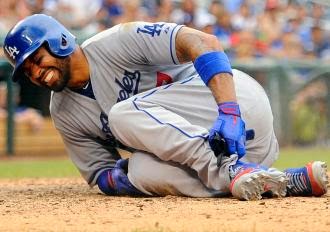 There's no doubt in my mind that Matt Kemp's pride at playing every game for over 3 consecutive years played a role in his injury issues.  Now they can't get him healthy enough to play half the season.  Kemp needs to drop the attitude and accept the fact that he needs days off and in the end it'll make him a better player.

Clayton Kershaw has pitched over 230 innings for three consecutive years.  Those are tough innings too because he's come within two strikeouts of leading the league in Ks for three straight years as well.  Are we living on borrowed time here?  He went on short days rest in the playoffs last year too.  All this is recipe for disaster and can catch up with him unless he has some sort of bionic arm.  Don't forget that Orel Heshiser went down with a serious shoulder ailment requiring sugary just one short season after the 1988 heroics.

Medical Staff criticisms
I know nothing about whether the Dodger medical staff is doing things right.  They have the advanced degrees.  They have the strength and conditioning coaches that work as hard as anybody I've ever seen.  They put in their time and their dedication is unparalleled.  They also have the best medical facilities in the game, at Spring training and at Dodger Stadium.  I have a hard time believing that the Dodgers are doing anything wrong here, but some are quick to criticize this group because of the numerous injuries that have surfaced over the years. 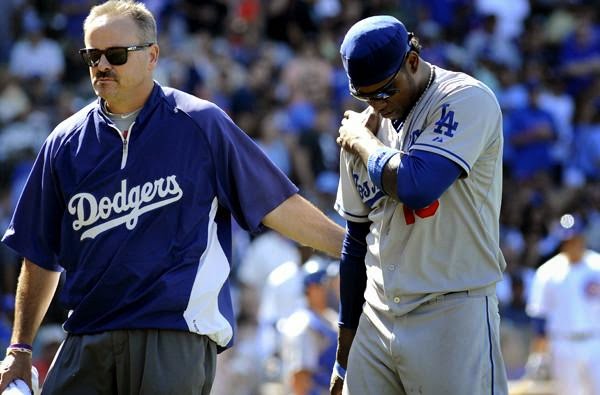 Bad luck has played a role though, and you can't control that.  Take Hanley Ramirez for example.  You can't blame the Dodger med staff for his WBC thumb injury last year.  You also can't blame them for Hanley running into a brick wall at Wrigley and the Cardinals beaning him in the ribs in the NLCS.  Those occurrences were unlucky and it's as simple as that.  Now, his hamstring issues?  Could that have been prevented?  Maybe so.  Perhaps the the med staff acquiescing to impatient players desires to return to the field too soon.

Keys to success on the health front
The bottom line is that baseball's 162 game season allows for numerous injuries and no team can avoid the aches and pains that occur throughout the full year.  The key is to minimize them as much as possible and have as many components ready to play when the post season arrives.  The Dodgers got to post season play last year, but they were hardly a healthy team when they arrived.   Had they been so, I have little doubt that they would have played in the fall classic.

Good teams overcome injuries, but more often than not, injuries can overcome good teams.  A combination of good luck combined with a crackerjack medical staff can play huge dividends.  The risky long term deals?  Well that is on the general manager, and it remains to be seen if the Dodgers have taken on too many of those contracts.
Posted by Evan Bladh at 8:46:00 AM