Beckett Returns to the Mound, So Far So Good

It was a morning at Camelback Ranch with a lot of wet fields and puddles that exposed flaws in the Glendale facility drainage system.  It was also D-Day for Josh Beckett, a former pitching ace that is trying to salvage his major league career.  Beckett is about as close to the end of his baseball career as he's ever been.  He’s also in for the fight of his life to land the final rotation spot on a Dodger team stacked with quality starters. 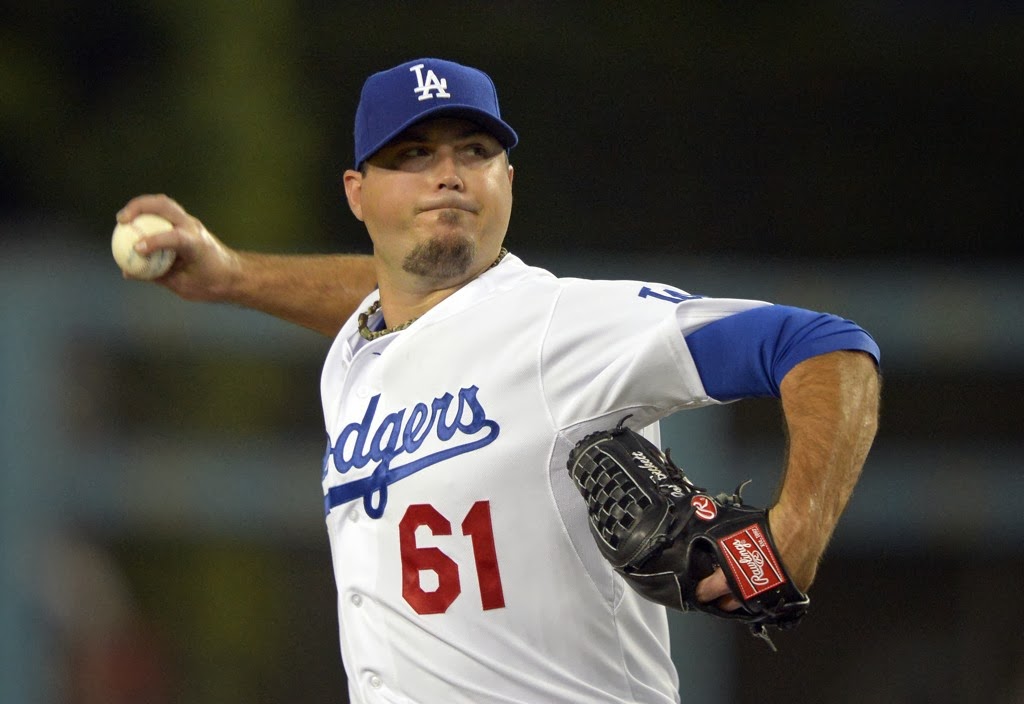 Beckett, Chad Billingsley, Paul Maholm, Stephen Fife and Matt Magill all vie for the number five starting slot in the Dodger rotation.  Add to that mix Zack Lee, Chris Reed and until recently Ross Stripling (who is now sidelined with an elbow injury) and it’s fairly safe to say that Los Angeles has the number 5 slot covered.  At least by somebody.  Beckett is certainly hoping he earns that spot this spring.

In today’s action, he returned to the mound for the first time in ten months following a risky surgical procedure that guaranteed him nothing.  The results on the field were quite promising for the veteran righty.  Two innings pitched, three strikeouts, one hit allowed on a measly infield single.  It was a promising enough start to surely make Beckett feel good about himself and his recovery so far.

For the first time in years Beckett doesn’t have a tingling sensation in the fingers of his pitching hand.  Numbness in that hand became the norm for him, but last year it got to the point that he couldn’t control his pitches.  After being shut down in May, he opted for thoracic outlet syndrome surgery in July.  The same surgery that such players as Jarrod Saltalamachia, Jeremy Bonderman, Hank Blalock and Kenny Rogers had.  All with success.

The surgery involves the removal of the first rib, just below the clavicle, that is compressing on nerves and blood vessels.  It isn’t a 100% recovery for everyone.  Chris Carpenter of the Cardinals was unable to resume his baseball career with success following the surgery.

After ten months of inactivity from the game, how could Beckett not be second guessing himself?  That’s a long time and an extremely risky procedure to undertake, but so far so good.  Josh already told the world he wouldn’t hold back when he reported for Spring training on February 12th:

“I’m not tentative.  I’m going to throw as hard as I can and see what happens.  Right now I feel great.  I’ll throw the ball until I blow out and I’m hoping that’s not for a few more years.”

Following today's outing, Beckett was quite positive about his performance.  For a complete review with some excellent quotes provided to Eric Stephen from both Beckett and Don Mattingly, take a look at TrueBlueLA.com.
**********************
The Dodgers ended the day deadlocked at 3 runs a piece with the Padres.  Again Dee Gordon impressed, this time with an RBI triple.  Chone Figgins collected two hits in the DH role and Alex Guerrero drove in a run with an RBI single.
**********************
Paul Maholm pitched two innings of scoreless ball in his debut in a Dodger uniform.
**********************
It was reported that Chad Billingsley experienced some soreness today, the day after he threw some breaking pitches during his 30 pitch session the day before.  Billingsley has been very aggressive in his rehab from Tommy John surgery.  Though no one is considering his soreness a setback, it's a reminder of the seriousness of his surgery and the need to exercise patience.
***********************
It was announced today that Justin Sellers has been sold to the Cleveland Indians and that he has reported to their camp in Goodyear, AZ.  Sellers was released following the announcement that the Dodgers had signed Erisbel Arruebarrena, the sleek fielding shortstop that started on the Cuban national team in last year's World Baseball Classic.  Arruebarrena has not arrived at Camelback Ranch yet, most likely due to visa issues.