The Separation of Social Classes to End At Dodger Stadium. Freedom for the Left Field Pavilion

It is the end of class warfare at Dodger Stadium in 2014 and I have Sons of Steve Garvey to thank for giving me the news.  A hat tip goes them as this link is a “must read” for those interested in changes at Dodger Stadium. (CLICK HERE)  SOSG reports that the Left Field Pavilion (LFP) will be connected to the rest of the Stadium and that construction is underway.  As someone that has been a pavilion attendee to Dodger games off and on for five decades, I must say that this change is probably the most significant  of all recent stadium upgrades to LFP diehards, some of which are the most passionate Dodger fans in existence.

* Pavilion fans have other food options than those available under their stands, which were extremely limited.

* LFP attendees aren’t limited access to the remaining 90% of the ballpark and will be able to experience the entire ballpark and its concourses.

* More fans will opt to try out the left field seats.  I know of some fans that avoided the LF pavilion experience because of the restrictions.  Now that won't be an excuse and this should encourage others to enjoy the game in this extremely raucious section of the stadium.

“The left field pavilion is almost like a prison,” said a longtime friend of mine a few years ago when I suggested we sit there.  He was deadset against it, mainly because of that reputation it has that dates back decades.  In the mid-70s, I recall the Dodgers suspending beer sales in the pavilion in what was an announced as an effort to create a more family friendly environment there.   There was no doubt that the beer induced fights had caught the attention of the organization.

I will argue that the underneath infrastructure of the LFP is what makes it so special.  As you ascend the stairs and the sunlight appears before your eyes, there is the beauty of Dodger Stadium in all its majesty.  It’s what I love about the place.  You go from the mundane to the magnificent in a matter of seconds.  Those steps leading to the grandstands and the gorgeous view of all things baseball really attack the visual senses.  There is no doubt you are in a special place.

I must admit though, once in the underneath structure of the LFP, it does have its unsightly areas.  Even after the stadium upgrades last season.  The fact that they put planters of petunias in front of the first row of seats may have seemed to be a good idea initially, but the predictability of the demise of the flowers was obvious.  Within a month or two, they were dead.

Underneath the stands it is more reminiscent of a prison than a ball yard.  There is an unattractive concrete floor and the exposed pavilion frame, steel infrastructure, concrete pillars, electrical conduit and exposed plumbing.  As you queue up in the concession lines, it almost looks more like a prison chow hall than a family friendly baseball venue.  You line up to get your food, a b.p. ball is hit over the wall and below the grandstand, and the free-for-all tussle for that sphere is reminiscent of a jailhouse brawl.  Topping things off is the security presence in the place that is probably more active than any other place in the Stadium.  Then there's the fact that the guards don’t allow you to traverse any other part of the stadium, and there you have it, the LFP Correctional Facility. 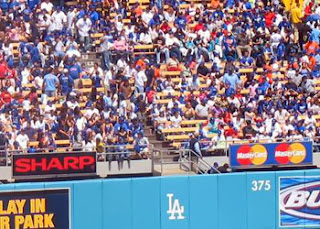 There are some that will claim that the LFP has that deserved reputation for rowdiness and fights,  There may be some truth to that fact, but I’ll argue there are other sections of the stadium that have had their share of disruptive behavior as well.  The opening up of the LFP to the rest of the stadium should change that and not spread the rowdy behavior as some would argue.  It's best to release the masses and democratize the entire stadium.  I'm surprised there weren't mass demonstrations and a "Mr. O'Malley, Tear Down This Wall," moment years ago.  To be honest  I'm disappointed in myself for not leading the charge.

Now all that is left is freeing the gluttons in the Right Field Pavilion to the rest of the masses.

Nah, forget it.  "Let them eat Dodger Dogs!"  They can stay there and engorge away.  But that's another post for another day.

UPDATE: Over at DodgerInsider.com, (LINKED HERE),  John Weisman interviewed Dodger Senior Vice President of Planning and Development, Janet Marie Smith and received a clear explanation of the construction beyond the pavilions.  I was completely wrong, the Left and Right Pavilions will continue to be segregated from the remainder of the Stadium.  Bullpen overhangs are being built with graded seating from the Field Level.  There will be a lot of concourse walking space and concessions.  To the rear of the Pavilions will be restaurants, team gift shops and seating areas with the Right Field side having a Tommy Lasorda themed Italian restaurant.

So with regard to the entire article mentioned above, as Emily Litella used to say: "Never mind." 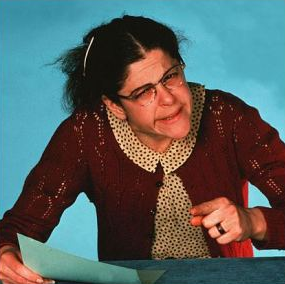