A work assignment has me in Salt Lake City, Utah for the past several days and I must say, I barely have time to log in to the internet.  Checking out Dodger news has been nearly impossible.  As work has ramped up the number of tasks that I have, this has forced me to cancel my trip to Camelback Ranch next week, something that I really looked forward to.  I did get a chance this afternoon to drive up to Ogden and checked out the minor league digs of the Ogden Raptors.  I must say, that ball park may be in the most beautiful setting I have ever seen for a baseball field.  You can nearly touch the snow capped mountains.  I’ll post pictures tomorrow when I return home.  Unfortunately, I failed to bring cables with me that allows me to download the photos onto my laptop.


I was saddened to read of the death of former umpire, Harry Wendelstedt, at age 73 today.  Harry, an umpire from 1966-98, was the umpire that extended Drysdale’s scoreless streak by ordering Giant batter Dick Dietz to return to the plate after failing to attempt to avoid a pitch.  That call took some guts, some say.  Others claim it was a “home field” call and that Dietz really didn’t have time to get out of the way.  I can’t say whether he got the call right or not because I never saw it in real time.    Former major leaguer Ron Hunt, the previous all-time leader in being hit by pitched balls said in a 2005 interview that he believed that Harry made the right call.  If anyone should know, he was the guy.   I will say this though, I have never seen that call made, ever.  How many guys lean their shoulder into slow curve balls these days to get on base?  And they get away with it.
I’ll always remember Wendelstedt for ejecting Jay Howell from game three of the 1988 NLCS against the Mets.  Davey Johnson waited for the right moment and asked for the glove to be checked.  That seemed to be a moment when the Dodgers were doomed in that series.  I’ll never forget how Harry took the glove with pine tar over to the stands where then NL President Bart Giamatti took a look at it during the game.
Harry’s son, Hunter Wendelstedt, has said that his father was diagnosed with brain cancer ten years ago.  Surviving that dreaded disease for ten years is a testament to his strength, stamina and drive.  I must say that the news of his death is a great loss to baseball.  He was a guy that took control of the game.  He was fair, and a gentleman.  He probably deserves a Hall of Fame induction and it’s too bad that he didn’t live to see that recognition. 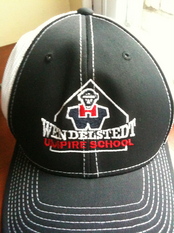 Wendelstedt, the founder of an umpiring school that bares his name in Ormand Beach, Florida, has influenced baseball officiating in a way that no other person has in the history of the game.  The Wendelstedt umpire school has produced more major league umpires than all other umpire schools combined.  If you graduate in the top levels from the Wendelstedt School of Umpiring, minor league jobs await.
Harry Wendelstesdt was a true baseball man. Hunter had this to say about his dad: “There’s been no one ever who loved the game of baseball and respected it more than him.  He lived for baseball.  He lived for umpiring.  When we were getting him into the ambulance he had the MLB TV on.  That’s all he would watch.”
Don Drysdale and Rosie are now playing games with Wendelstedt calling balls and strikes behind the plate.
Posted by Evan Bladh at 6:52:00 PM