Dee Gordon - No "Flash" in the Pan 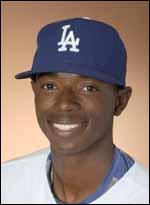 If Usain Bolt wore baseball spikes, he'd look like him.  He is what Herb Washington was supposed to be as a baseball player.  You'd expect his name to surface every 4 years in cities like Athens, Sydney and Beijing.  He is the type of athlete that Phil Knight would name a wing of a building after in Niketown, Oregon.  He's the fastest man in baseball, and very few know it.  But they will soon and they definitely know it now in Atlanta.
Dee Gordon is certainly the Gordon that should be named "Flash."  I think he could outrun his dad's fastball.  He probably could sprint to first after fielding grounders and arrive faster than his throw would.  He turns singles into doubles and doubles into triples.   He is exciting and flashy.  His enthusiasm is contagious.  He's a 23 year old 145 lb. shortstop that is proving that he belongs in the Majors.
He's a tweeting fiend and as fun a player to watch as there is in the major leagues.  Here's to a prosperous MLB career Dee, and to an off season where you can bulk up a bit more to make you less injury prone.
This final video of tonight's winning run is something I watched with awe.  It was a shallow fly ball and a relatively good throw from Michael Bourn, and the play wasn't even close.  Dee Gordon is the fastest man alive!
Posted by Evan Bladh at 1:13:00 AM