Brief Thoughts from Last Nights Victory, On to .500! 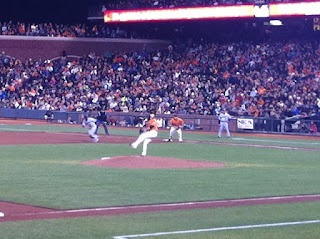 It's a grainy photo.  I took it on my I-phone last night from my seats thirteen rows up from the field down the third base line.  However, the way I see it, the picture tells the story of last night's game.

Kemp takes off as Lincecum delivers a pitch to Juan Rivera.  The Bison is safe at second for his 38th stolen base on the year and shortly afterwords, he's singled home by Juan Rivera to tie the game.

Yesterday lived up to it's billing.  Kershaw and Lincecum were magnificent.  I thought Mattingly made the right moves in the last two innings to outmanage Bochy.  And that was the difference in the ballgame.  He played "small ball" having runners stealing bases,  laying down the sacrifice bunts, running on contact from third base with the infield in. Squeezing out two runs in the final two innings against a formidable Lincecum and Casilla.
********************************** 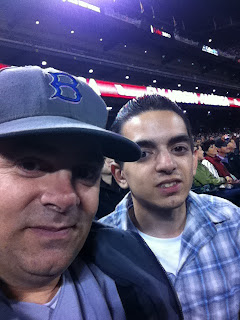 It doesn't matter that he's 22 now.  Taking in the game with my son is always special.  This year marks the 20th year that we have gone out together to see the Dodgers.  Precious moments that will always mean a lot to me.  A tradition that my dad shared with me.  Nice to enjoy a win together.
On to .500 with tongiht's game!
Posted by Evan Bladh at 6:33:00 PM