It's not fun watching a World Series when you know your team should be there.  It's worse when the team representing the National League is the Giants.  I can't remember feeling so much bitterness watching the fall classic.  This was the year, it really was.  I can honestly say that I believed the Dodgers were the best in the National League, even with their deficiencies in middle relief, I still believed they had enough to get the ball to Howell and later Jansen in the 8th and 9th innings.

I mean seriously, the areas of deficiency was "middle relief?"  Who needs middle relief?  Its not like the trade deadline looms and we're all clamoring for our GM to go acquire a guy that can pitch the 6th inning.  You can usually weather through the 6th and 7th innings with the likes of up and coming minor leaguers, and the Dodgers had plenty of those guys like Baez and Frias.  Last year Chris Withrow and Paco Rodriguez filled that role rather nicely.

Now as we watch the Royals and their excellent bullpen, and the vital role it has played in their 10-1 post season performance (thus far), the reality of having quality relief pitchers has really hit home.  These are relief pitchers from top to bottom.  All quality and handling their role with precision.

We are looking at two second place teams that practically ran the table into the fall classic due in a large part to steady defense and quality bullpens.  Two areas of play where the Dodgers lacked strength.  Middle relief isn't that sexy.  In fact, we used to joke at Colletti's efforts to acquire veteran relievers and sign them long term.  Players like Brandon League, Octavio Dotel, Jamey Wright, Brian Wilson, Matt Guerrier, Peter Moylan, Ronald Belisario, Todd Coffey, Chris Perez, Randy Choate, Blake Hawksworth, and others.

So as much as we criticize Colletii and his failure to land quality relief pitchers at this 2014 trade deadline, I honestly ask, "was that criticism fair?"  We'd seen Colletii deal off prospects for relievers in the past and we screamed about how incompetent he was.  Remember the Lambo/McDonald for Dotel trade? That one left me seething in anger.  When August 1st rolled around and he had failed to trade Pederson, Seager or Urias for a veteran relief pitcher, many of us were relieved of that fact. 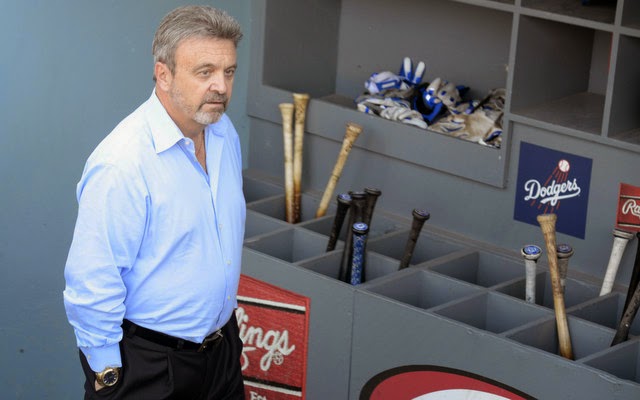 Funny thing is though, his failure to acquire a middle reliever probably served as his undoing.  I'm pleased that Colletti is gone, because his tenure had it's share of foibles, especially with expensive free agency signings, but I would have never guessed that he would be removed because he failed to sign a middle reliever or two when in previous years, he would stock up on them to the point of silliness.

Here we are though, watching two teams that we never imagined would make it to the World Series.  And it's because the Dodgers couldn't trust their bullpen and they coughed up three games in the NLDS as a result.  It'll be interesting what the new regime does in this area as 2015 nears.  Honestly though, isn't it a bit hypocritical to rip Colletti over his failure to stockpile middle relievers when that was his M.O. for several years?