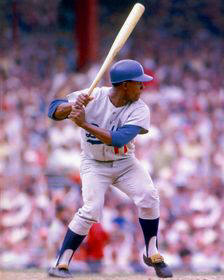 It was a prized possession of my brother, Taylor.  He ordered it from Louisville Slugger, special order.  It probably cost him about $30 which was a lot for a bat in 1974, and considering that his after school job at a local Hacienda Heights deli paid him about $1.65 and hour, he made a lot of sandwiches in order to pay for that stick.
A cone handled bat.  That was so cool.  No knob.  You could take your hands down to the nub.  To the very end of it.  No need to choke up.  Yes, I know. We’ve seen hundreds of these bats today, but back in the 70s, you went to a Sporting Goods store and all the bats had handles with bulky knobs forcing you to choke up a smidge.  And they were models only of the stars of the day.  Bench, Mays, Robinson, Jackson, Rose, Stargell.  You’d never see a model of an obscure Dodger pinch hitter at the Conlin Bros. Sporting Goods in Whittier.  So Taylor ordered the bat.  And it arrived in the mail thru much fan fare at our humble abode.
Wood bats were chic back then.  Sure, aluminum bats were in use, but there was nothing better than the sweet crack of ash on a weathered and tarnished used baseball.  We’d play ball at the local elementary school, a defacto baseball/over the line game that we had conjured up to adjust to limited players and closed fields.  My dad had taught us an over-the-line game that involved running the bases that forced athelticsim and speed out of the players.  It went like this:
Any ball hit past the line between 2nd and 3rd had to be run out.  The fielder needed to retrieve the ball and throw it past the line before the batter/runner arrived to first base.  This required hustle and cat like fielding reflexes.  You could hit a solid single to left field, but if the left fielder got the ball back in past the line before the batter reached first base, it was an out.  As a result, all my buddies were quick out of the batters box and there was never a lack of hustle.
Taylor’s Mota model bat became a quick favorite of everyone and it miraculously survived 3 seasons of punishment and battering as the most popular stick in the bunch. My brother is 4 years ahead of me in age, and he went off to college and then a church mission to Australia.  Back home, we just kept playing ball.  And then it happened.
During a pickup game during the summer of ’77, Alan, a fine player with a lot of sock, ripped a home run way out to deep left.  When I retuned in from the field he pulled me aside.  “Hey Ev, the Mota bat just died a hero,” he said.  “What?!  You’re kidding, right?”  But, no he wasn’t.  A nice hairline crack was there, from the point of contact, through the trademark and all the way through the barrel.  “I can nail it back together I think,” he said.
Nailing it back together didn’t work.  I wrote my bro and broke him the bad news.  To this day I have searched for a Mota Model Louisville slugger many times. Ebay searches and online auctions have come up empty.  I have thought of writing Mota personally to ask if he has a personal stash of bats and if he’d be willing to sell me one.  But I’ve never got around to it.  Fact is, I wouldn’t even know how to ask him.
Taylor is 53 years old now, but I can’t help thinking that if I could just get him a Mota bat and surprise him with it for Christmas or on his birthday, that would be the gift of a lifetime.  Maybe one day.
Posted by Evan Bladh at 12:12:00 AM