The 2011 Roster Already Has the Winning Pieces in Place 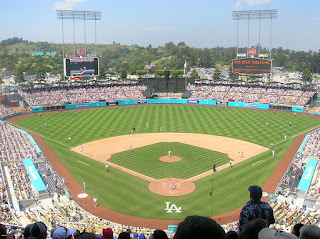 This roster really isn’t as bad as everyone thinks.  And that’s a good thing, because no one will pick the Dodgers to win anything in 2011, and they’ll sneak up and win the division.  This is not 2003 redux as so many suggest.  This Dodger club has some offensive pop and is so much better offensively than the ’03 punchless version.  So here is my thinking, and bare with me now, because in the end, I believe it makes sense.
2010 was an aberration.  The season’s disappointing results came from an accumulation of things going wrong that just snowballed.  2010 is history now.  I place the bulk of the blame on: Torre and his coaching staff and Ned Colletti and his trade deadline panic moves and big mouth.  I’ll talk about the former and cover the latter on another day.
The Impact of Joe Torre
Joe Torre had issues.  He carried grudges and his ego forced him to make bad choices.  In one afternoon he destroyed Jonathan Broxton in an attempt to take a meaningless series against the Yankees.  Why? Because it was against the team he still wished he was managing and it was on a national stage.  He wanted it bad.  So badly that Torre risked ruining his closer in an effort to win one meaningless game in June.  Broxton threw over 50 pitches in that disastrous 9th and nobody was even up in the pen to relieve him.  After that game, he was never the same.  If that outing didn’t break him physically, it definitely broke him mentally.  Take a look at the splits in Broxton’s stats.
Before the June 30th game vs. Yankees:
Games    IP ER ERA SO BB SO/BB Ratio W        L          Sv
33 32.2       3    0.84    48    5    9.6      3       0        16
After the June 30th game:
Games    IP ER ERA SO BB SO/BB Ratio W        L          Sv
31     29.2      25     7.58       30   18    1.67        2    6         6
We are looking at stats from the best closer in the majors pre-June 30th.   He was absolutely lights out between March 30 and June 30th.   Broxton completely lost it following that outing.  Whether it be a physical issue or mental, only he knows and perhaps the Dodger medical staff.  But Torre is to blame.
Joe Torre is a great interview and very accommodating and communicative with the media, (and believe me, he never saw a camera or a celebrity that he didn’t like).  But he doesn’t communicate well with his players.   Case in point was his failure to resolve issues with Matt Kemp.  I was perplexed that he didn’t sit down with Kemp and talk out the problem he had with Schaeffer over his lack of hustle?  That he had to force Kemp to come to him on his knees to his office to kiss his World Series rings and beg to be put back in the lineup?  The communication was so bad between Torre, his coaching staff and Kemp that Dave Stewart had to go to the press and complain about it.  To Kemp’s credit, he took the high road and admitted some blame on his part.  But come on!  It never should have got to that point.  Give me a break!
Torre failed to communicate with Orlando Hudson in the previous year and let him rot on the bench while Belliard finished the season at second base.  Granted, Belliard had the hot bat, but Hudson was no slouch either.  And when Hudson pinch homered in the game 5 of the NLCS in Philadelphia, there was a prime chance to keep Hudson in the lineup with a double switch and Torre didn’t do it, in the most crucial game of the year, Hudson had just cracked a clutch pinch homer and he simply removed him from the game!  It was ridiculous, Belliard cost the club dearly in the playoffs when he was unable properly field his position with zero range and his inability to field popups between second base and right field that were routine for Hudson all season long.
There was so much more.  I could go on and on about Torre and his failures as a field general.  (Burning out bullpens, failures to double switch at crucial times, going with over-the-hill vets and not giving the young guys shots, etc).  So it is a positive step that the egomaniac is gone.  And with that, I predict, that the poor years that solid starters Kemp, Ethier, and Loney had will be gone as well.  If those three are to recover even half of the production that they lost between 2009 and 2010, the club easily improves by 5-6 games. 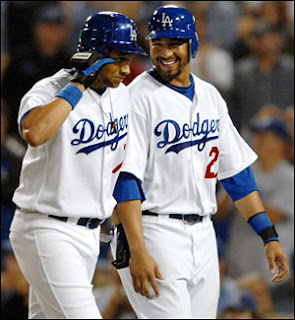 Pitching Staff can compete with anyone
The pitching staff is better, no doubt.   Let the national wonks rave about the Phillies, Giants, Cardinals and Brewers starting pitching.  The Dodger staff holds its own with five 10 game winners all with ERAs under 4.00.  Kershaw is about to come into his own and battle for a Cy Young Award this coming year.  Umpires are starting to give him pitches on the black as he gains a more favorable reputation with them, and that will be crucial as his BB/K ratio improves.  Billingsley is back and both he and Kershaw as a one-two punch can win between 35-40 games alone. 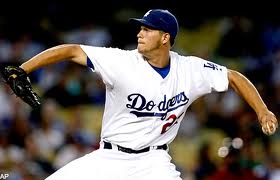 The remaining starters are no slouches either.  Kuroda returns from his best statistical year.  Lilly benefits from the Dodger Stadium air that tends to keep fly balls in the yard and Garland, as a fifth starter is a solid innings eater that has always performed well at Chavez Ravine.  And then if anything goes wrong with the top five, we’ve got Soap Bubble Padilla in the bully who can return to a starter’s role.
The bullpen doesn’t concern me provided that Broxton is healthy.  And that is the one question I have going into the off season.  Was he hurt in the last 3 months of the season.  Velocity was definitely down and his pitch selection was very questionable.  But with Kuo and Jansen back, those two can close out the late innings.  Guerrier is a nice set up man pick up.  With the starting staff, it should be rare to see the bullpen used prior to the 7th inning.  The addition of Padilla to the pen should be interesting.  Soap Bubble can bring it when necessary.  Is he a potential part time closer?
Filling the holes from within the 40 man roster
Many say that the Dodgers have a deep hole and third base, left field and in the number 2 spot in the batting order.  They claim that they should pay to return Beltre to the fold.  I’d love to see Adrian back in blue, but it ‘aint gonna happen.   He’s a Boras client and they’d need to break the bank to lock him up.  But losing out on Beltre  may not be so bad after all.  I truly believe that the pieces are in place right now.  Here is my solution:
1-Start Uribe at third base.  He’s got some sock.  He fields the position, perhaps not as solidly as Blake, but he isn’t a mess out there.
2-Move Casey Blake to left field to platoon with Gibbons.  Blake faces the lefties and Gibbons the righties.  Blake is in his last year of his contract and can be a stop gap in left until we pick up a free agent or Trayvon Robinson is ready for the show.  Between Gibbons and Blake, that is probably  25 dingers from the corner outfield position, which will do the trick.
3-Give Ivan DeJesus Jr. a true shot to be the starting second baseman and bat number 2 in the order.  DeJesus has a respectable OBP in the minors.  He recently lit it up in the AZ fall league, he has speed and a good eye and second base is his best position.  And if he isn’t quite ready for the bigs, then 2010 team MVP Jamie Carroll can step in and start at second base.
There it is.  Problems solved.  Power bat at third base.  Power bats in LF.  Good OBP bat, steady glove and number two hitter at second base.
The winning roster is in place.  That club improves the Dodgers win total by  10-12 games.
Add another 2-3 games to the win total due to the addition of Davey Lopes and Tim Wallach to the coaching staff.  This might be the most valuable move of the off-season.  Lopes has already reached out to Kemp to take him under his wing.  Hopefully he can reduce the base running blunders.  Get Kemp to focus and keep his head in the game.  Put that 5-tool guy back on track to his MVP potential.  Lopes had the Phillies leading the league in Stolen base % for 3 consecutive seasons, just improvements in that area and getting the guys to advance from 1st to 3rd and 2nd to home on singles could be vital to 2011 Dodger success.  Wallach has shown an ability to reach his young players as the Albuquerque manager.  He is a someone they won't hesitate to reach out to.
I see this group winning 92 games and taking the West for the 3rd time in the last 4 seasons.
Posted by Evan Bladh at 5:44:00 PM