You Can Never Have Too Much Pitching

It was nice to sweep Minnesota to start off the road trip, but at the expense of what?  The entire pitching staff?

I'm becoming a true believer in the adage that "you can never have too much pitching."  Based on last season and the start of this one, Los Angeles has proved it to be true.  The Dodgers current state of the pitching staff is precarious at best.  Overworked and weary they are, and just two days into the month of May.  This is a serious situation and arms are bound to be falling off by the all star break if their torrid pace of use continues.

A lot of factors have created this problem:

*An abnormally amount of extra-inning affairs.

Seven out of 29 games have gone to extra innings.  That's over 24% of their games.  Not only are extra innings required of the staff, but taxing ones at that.  This takes a toll and as the season wears on, either injuries surface or a deterioration of quality develops.  We may already be seeing that deterioration in Kenley Jansen's performances due to over work.  His 34 pitch 12th inning last night was painful to watch.  He didn't miss many bats, that's for sure.

*A starting pitching staff that can't close out games.

It's the state of the game today.  The complete games is slowly being phased out.  Pitchers aren't groomed to finish games.  Multi-million dollar contracts have forced organization to exercise caution and protect their best starting pitchers.  What has resulted is overuse of relief pitchers. 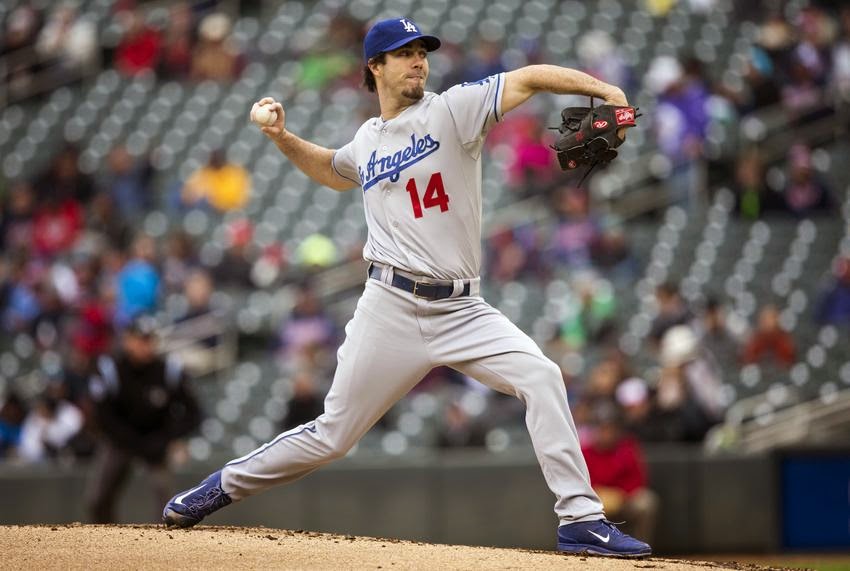 *The absence of Clayton Kershaw for the first five weeks of the season.

If there is a Dodger that has been counted on to eat innings, it is Clayton Kershaw.  Don't think for a minute that his absence hasn't hurt.  It has a lot and the bullpen has paid the price.  Things should be better on that front in a few weeks.  I say a few weeks because Kershaw will be allowed to pitch with extreme caution.  Don't expect any CGs out of Clayton for a good while.

*The baseball mentality that Mattingly has bought into, results in bullpen overuse and burning up relievers to get one out.

Setting up those strategic match ups are a pet peeve of mine in today's game.  The creation of the one-inning closer is another.  Both of these scenarios have changed the baseball mentality of coaches from the Little League level up t the majors.  Pitch counts are relied up too much.  That 100 pitch limit is seen as a universal "pull my guy out" level.

These changes in the game are too fully entrenched.  Young men entering the majors haven't got the stamina to last into the deep innings.  It has preserved careers probably, but only for starters, because now relievers are overused.

Watch for another roster move soon.  By the time that is made, I'll be on a plane, so stay tune at the other blogs for an announcement from Miami.  Red Patterson will probably be optioned out, which is a shame, as the kid deserves at least a few days to enjoy the big league per diem and the major league clubhouse spreads. Kudos to the kid for pitching 5 innings of quality baseball.  Too bad the run support wasn't there.

A concern has to be there about the horrid and embarrassingly pathetic Dodger defense during the first 29 games this season.  That Keystone cops routine in the first inning yesterday during game one was just something you shake your head at and say, "only the Dodgers."  I think it's time to simply accept the fact that this team isn't very good at catching and throwing the ball.  There will be games lost on account of the "D."  Fortunately the opponent was the Twins yesterday.

Good teams will take advantage of those defensive miscues and convert them into wins.  The Dodger players are who they are.  No amount of practice is going to fix Crawford's arm or Hanley's double clutching.  Those guys are professionals and will have to shore up their defensive game or risk national embarrassment when the games gain much more attention during the pennant race stretch.