Hoping that the Most Exciting Player in the N. L. Stays Injury Free

One of the reasons I really look forward to the 2012 season is to see how this team gels with Dee Gordon playing shortstop every night.  Gordon could be the envy of every team in the National League.  He will definitely open some eyes.  I can hardly wait to see the Giant fan base up here as they become fearful of the havoc he will cause on the base paths.  I have tried to tell some here, and these guys have no idea what they will be dealing with for years.  I dare say that he is potentially the most exciting player in the league.
The kid is simply the fastest man I have ever seen on the baseball diamond and I have seen some good ones over the years.   Willie Wilson, Rickey Henderson, Vince Coleman, and Lou Brock, I’ve seen them all and none had the out and out foot speed of Devaris Gordon.  So that leads me to my greatest concern and this question.
How vulnerable to Injury is Dee Gordon?
I must admit that Dee’s slender frame makes me uneasy.  With the rigors of a full 162 game major league season, I wonder if Gordon can hold up through an entire year.  It isn’t like he is the kind of player that will avoid contact or collision vulnerable action.  To the contrary, aside from the catching position, I doubt there is a Dodger player on the roster that will be less active in physical contact activity.  With Dee’s head first dives, avoiding take out slides in double play break ups, taking extra bases and most likely numerous slides into bases due to his aggressive nature, the probability of Gordon going down with injury is quite high.  We saw it last season when he hurt his shoulder on a defensive play at first base as he dove and made a tag. 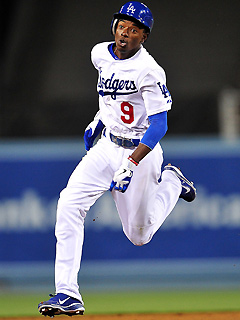 Gordon’s aggressiveness is his strength as a player.  He is a game changer and the type of player that can spark a rally and steal the occasional run when necessary.  For that reason I think he’s probably the most exciting player on the roster.  Sure, there is Matt Kemp who without a doubt is the most valuable, but Gordon's spark has the potential to really light up a crowd.   I just hope that as he grows over the years, he naturally bulks up and gains more strength.  Meanwhile, we can cross our fingers every time he collides with someone.
This leads me to another topic and an issue that I have with the modern game.  It’s the head first slide.  Is it really something that improves a players ability to steal a bag?  Wills, Brock, Aparicio, Lopes, Jackie Robinson all seemed to have enormous success sliding in feet first.  That head first slide leaves a player much more vulnerable to injury.  Apart from possibly getting hit on the noggin or tagged in the face there are the hand, wrist and arm injuries, shoulder vulnerability and broken and jammed fingers.  I wonder what Wills' feelings are on the topic today. 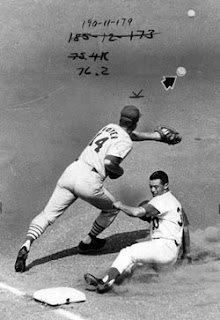 Based on a September, 1962 Life Magazine article by Wills, he said that he only went in head first when his legs were so bruised up from sliding that he had no other option: ”Until the bruises on my left leg got so painful... from too much sliding, I had tried only one headfirst slide all year--and that one helped win a ballgame...”
Maury up front admitted to Life that the head first slide was a quicker way to reach the bag, as his feet first method was more effective in avoiding tags.  He even went so far to say that sliding late was a faster way to reach the base.  “I always slide later than most players.  Once you go into a slide it slows you down.  By staying on my feet two extra steps I get into the bag quicker.”
With all the influence of Wills over the past decade or so, I find it interesting that he hasn’t preached these tactics to the modern day players that all seem to slide in head first.  With Wills and Lopes around, and the injury vulnerability that Dee Gordon will face, I really wish those two would preach and teach the feet first approach to sliding to Gordon.  With Dee’s amazing speed, I believe that he could be the type of player that would have tremendous base stealing success going in feet first with late slides as Wills did.   Flash's son truly does live up to his father's nickname.