Many don’t recognize the name.  Others remember him as the greatest baseball forger of all time.  Those with connections to the Dodger Organization from years past know he was a tireless worker, and enthusiastic personality and true friend.  His family has reached out in the last few years and shared some of the memories of this interesting and extraordinary man in Dodger history.
Charlie was a bat boy.  Many probably considered him the luckiest kid in Brooklyn.  Who wouldn’t?  He was fortunate to be a witness to the Boys of Summer during a magical period in baseball.  The 1950s in the hotbed of the Brooklyn borough.
But that wasn’t an easy job to get.  It was a job that he earned by paying his dues as a loyal Dodger employee as a turnstyle ticket taker, clubhouse boy and aide in the locker room.  Those dues were paid mopping floors, doing laundry, preparing the locker room and dugout, sorting mail, and serving as a clubhouse boy in the visiting dugout.
Charlie was a popular kid.  The players enjoyed his outgoing style.  This came from both home and visiting players.  A keeper of the players property, guardian of their tools of trade.  Never a complaint was made about the short and stocky kid who was limited physically by a heart condition he developed through a bout with rheumatic fever in his youth.  While recovering in the hospital, during a four year recovery period, Charlie wrote his idol, Leo Durocher.  Eventually Leo offered Charlie a job with the ballclub.  With some time, he made it to the clubhouse, and the rest they say is history.
It took several years for DiGiovanna to become the full time Dodger dugout bat boy, but by age 22, he was there.  He is proudly seated in the bottom row of every team photograph from 1952-56.  Nicknamed “The Brow” for his obvious physical feature, Charlie was promoted to the position of Assistant Clubhouse manager in 1957, a position he earned through hard work, dedication and perseverance.
The forgeries
One of the bat boy duties was to ensure that dozens of baseballs were signed by the  entire team in full.  This was to be compeleed every day.  We are talking hundreds of baseballs.  It was a chore that was difficult to fulfill.  I can only image how hard it would be to get 25 signatures from ballplayers that were constantly coming and going.  So Charlie did the next best thing.  He became a skilled forger.  So good that Duke Snider would later say, “He could sign my name better than me.”


This, of course, has raised questions in the memorabilia industry today about what are legitimate Brooklyn Dodger signed baseballs.  One thing that DiGiovanna did was sign all the autographs in the same panel and same order on the balls in order to avoid duplication.  As a result,  spotting his forgeries isn't that difficult.


Almost as much a part of the Brooklyn Dodgers as the players, Charlie became as well known as Hilda Chester, the Sym"phony" band and Happy Felton.  He is part of Dodger lore and was a true member of the family.  It is reported that even Vin Scully would mention DiGiovanni by name, announcing in 1957 that he just retireived a foul tip behind the plate and congratulating him on his new promotion as "Charlie D. is now the new Clubhouse Assistant."

With the Dodger move to Los Angeles, Dodger historian Mark Langill reported that Ed Roebuck and Charlie made the trip west to Los Angeles together.  Apparently DiGiovanna's dog swallowed a ball when they were visiting the Grand Canyon, costing them about $200 to a veterinarian.
When the duo arrived to Los Angeles following their cross-country trek, Charlie was sought out by a panicked Red Patterson, team Publicity Director.  “Boy, Am I glad to see you,” he said.  They needed his talent as a skilled forger for the cover of the yearbook.”  Sure enough, the 1958 Dodger yearbook cover is of an illustration of an enlarged baseball, signed by all the players.  The reality is that the signatures were all done by one person, Charlie DiGiovanna.

His children and grandchildren speak and provide rare photographs of Dodger history
The baseball blog -  baseball-fever.com,  had some interesting visitors a few years back.  It is well worth registering to see the amazing baseball history posted on this blog.  Charlie DiGiovanna’s son Greg and his grandaughter who was born long after his death, Angela, both have contributed interesting stories about their famous father and grandfather. And forum contributors have shared stories of Charlie too.
Brooklyn fans have come forward and told them how charming and welcoming Charlie was to the fans at Ebbets Field.   Some even said they were present at his funeral over 50 years ago. 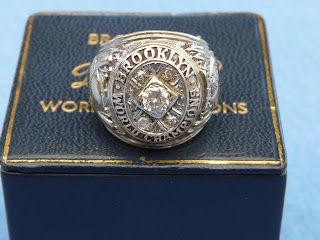 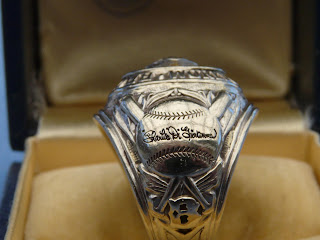 Charlie DiGiovanna's 1955 World Series Ring is in the possession of his son, Greg DiGiovanna
Greg stated that he wanted to clear up some misinformation that had been written about his father.  Mainly that he remained with the Dodgers and moved west.  And the date of his death, which was December 28, 1958 of a heart attack.  (Greg was 8 years old at the time).  It was a tragic story.  A young family with three young children, all under the age of eight, left fatherless on the West Coast, less than a year after the Dodgers move.  I haven't been successful at researching what became of the family and how they were cared for after Charlie's death, but based on the postings by Greg DiGiovanna, the family did remain west and an award named after Charlie was instituted in 1964.

Greg posted the following on the baseball fever website on Dec. 27, 2007: "'...he was always giving his all at whatever he attempted and he always lived life to the fullest, sharing himself unselfishly with everyone who crossed his path.  I still struggle with this time of year, having lost my dad just three days after Christmas, when I was only eight years old, but the wonderful memories he left us with have always kept me above the water line in life.  God Bless all you "Dodger Blues" who have helped keep his memory alive after all these years. " 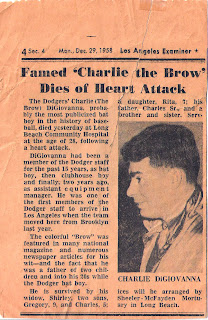