The more I read about Josh Macciello, the more I want him as owner of the Dodgers.  I have waivered over which potential ownership group I support over the past year.  Looking back over the past 8-9 months I can see how my emotions ebbed and flowed and matured over time.


Initially when Steve Garvey expressed interest, I was for it...based on emotion from all the McCourt mess and the fact that a “Dodger” wanted the team.  (  Article linked here ) Eventually, common sense entered into the picture and I steered away from that idea when considering Gravey’s past problems in the public eye.
I then favored  a return of the O'Malley family.  I interviewed Walter O's grandson, Tom Seidler,  and attempted to gain some public sentiment in that direction.  With Tom’s uncle Peter entering into the fray, I thought that would be the way to go.   Remembrances of the O’Malley family in charge are positive for the most part.  But with so many bidders with so much money that far surpass the O’Malley family wealth, they don’t look like a good fit.  Additionally, if you look at Peter’s ownership during the last 8-9 years with the club, things were deteriorating quickly for the Dodgers towards the end of his ownership.  Now with the Disney family joining that group, who knows?
Mark Cuban caught my interest.  I love his passion and desire to win.  But when he started talking about the asking price possibly being too high, I started to look elsewhere.  I want a guy that can spend.  It looks lie Cuban doesn;t have the funding to continue spending once the purchase is made.  We are the 2nd largest market in the country and we need to spend like it.
Steven Cohen, the Wall Street hedge fund guy looked interesting.  He certainly has the big bucks.  But he brings baggage.  A company with some ethics issues (though he isn’t tied to them).  The fact that he’s never even been to Dodger Stadium is bothersome.  Who needs another carpetbagger?  And one from the Big Apple to boot.  Memories of Chase Carey return.
Dennis Gilbert is no carpetbagger.  Heck, he sits in the first row behind home plate for every game.  A Dodger fan, a billionaire and a man knowledgeable about the game (former minor league player and agent).  Not a bad fit.  But not as rich as some other bidders.
I like Magic Johnson.  He is L.A.  He is loved here.  Better said, he is revered here.  Magic says he’ll recruit free agents himself.  That brings some attraction, and Kasten and the Guggenheim group behind him are worth billions.  A good fit.  He may be my favorite.
I never have liked the Torre group.  I have expressed my feelings for Torre many times on this blog before.  Alan Casden’s desire to level Dodger Stadium during the last ownership run turned me off to the idea of him owning the team.  The Fred Claire group, don’t know enough about them.
But then an unknown named Josh Macciello enters the fray and over the past few months, his interest intrigues me more and more.  This is a man that has done his homework and sincerely wants to turn the Dodgers into the most elite franchise in the game.  Today he is saying that he thinks he might have submitted the highest bid,  Is it possible that he offered something crazy like $2 billion?  How would MLB react if the Dodger bid comes in at $2 billion.  You’d have giddiness prevailing in ownership booths around the country because everyone’s franchise value has just gone up.
Today The Sporting News', Anthony Witrado,  has an intriguing article on Josh Macciello that is a  must read for everyone following thw Dodger ownership saga.  Macciello’s story is quite extraordinary.  A rags to riches tale in the span of 6-7 years.  It is the kind of story that makes you realize that if you truly pursue your dreams, you can achieve anything.  I find what he has done as quite admirable.  It makes me want to kick myself for not having the guts to take risks and going for my dreams at an earlier time in my life.  And its also the type of story that is motivational in nature too, proving that hard work and effort can result in amazing things.
*********************************************************
Mets Blog Links Up My Piazza Post and a Few Comments Come In
The popular Mets blog, (www.metsblog.com),  linked up my Piazza piece  and I found that there are interesting comments from the Met faithful that address something I never really brought up: Which cap should Piazza be wearing on his Hall of Fame plaque?

I can see arguments for both sides.  Piazza’s numbers as a Dodger were simply astounding and earth shattering for a catcher.  Mike’s accomplishments as a Met successful from a team stand point.  As a Dodger fan, I hope he goes in as a Dodger, but we are all aware of Mike’s statements with regard to the matter.  He prefers to go in as a Met.  The entire situation makes me loath Chase Carey all the more because he was our “can’t miss” Hall of Famer. 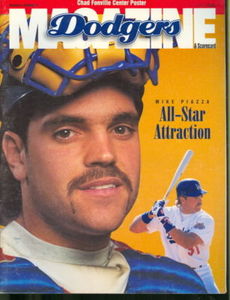 What many Met fans are probably unaware of is that Piazza was the face of the Dodger franchise for five years (’93-until his trade in ’98).  Dodger marketing was focused around him.  The Kids Fan Club was centered around him.  He was by far the most popular Dodger and the most feared hitter in the line up.  As much as they love him in New York, I can argue that he was equally valued and revered as a Dodger.
Posted by Evan Bladh at 1:36:00 AM